Painting, Timon, being rescued, someone brave, cunning, and resourceful

Being kidnapped, Timon choosing Pumbaa over her (possibly)

Duke Meerkat (father)
Tatiana is a character from the Timon & Pumbaa TV series. She is the daughter of the Duke Meerkat, the chief of Timon's former colony. She only appears "Once Upon a Timon".

“She wants somebody brave, and cunning, and resourceful”
―Timon about Tatiana

Tatiana is a kind and loving meerkat. After being rescued by Timon and Pumbaa from the cobra, she develops a romantic feeling for Timon, as she calls him her hero and offers him a hand in marriage. According to Timon, Tatiana loves anyone who is brave, cunning, and resourceful, though Fred states that only candy and flowers (and a bath) are needed to impress her.

Tatiana is also shown to be a painter. During the cobra attack, she is seen painting a picture of bugs in a bowl on a black board. It is unknown if she completed her painting as she is interrupted by the cobra, who kidnaps her.

Tatiana is a pale brown meerkat with dark brown stripes and a creamy white chest. In addition to that, she has blonde hair with a blue ribbon and wears a tiara.

"Once Upon a Timon"

One day, the duke leaves the meerkat colony, leaving Tatiana alone in the castle with Fred in charge of said castle. Meanwhile, Timon, who is guarding the back gate, daydreams about the princess. Fred shows up and convinces Timon that with the Duke gone for the day, it is now his chance to speak with the princess.

Timon, at first, doesn't approve of Fred's suggestion, knowing that he will get banished if he leaves his post, but according to his friend, not if he doesn't get caught. After thinking about for a few seconds, Timon thinks Fred might be right and he gets an idea. He places a mop as a dummy to make any predator believe the back gate is being protected.

However, when Timon enters the colony, a cobra shows up and is not convinced by the dummy trick. While Timon is taking a shower as he prepares for his date with Tatiana, the cobra invades the colony and kidnaps the princess. After the attack, Fred shows all the other meerkats (minus Timon, who is still getting ready for his date) that all that's left of Tatiana is her tiara, making everyone believe she is dead. The captain of the guard questions the possibility of that happening as nothing passed the front gate, but when Fred brings up the back gate, everyone realizes Timon's absence.

When the guards discover that Timon abandoned his post, Timon attempts to escape them. When he succeeds, his luck doesn't last as he runs into the duke, who has heard of the loss of Tatiana. He puts Timon on trial and banished him from the colony.

After Timon meets Pumbaa and developed a friendship with him, the two find Tatiana still captive by the cobra. Timon suggests that if he and Pumbaa rescue the princess, he will be accepted back to the colony, marry her and live a glamorous life. When he also tells Pumbaa that he will be accepted to the colony as well, the warthog is willing to help him save the princess.

After Tatiana gets rescued by Timon and Pumbaa and the cobra is defeated, the three return to the colony and Tatiana reunites with her father. When the duke gives Timon a golden key for power and some riches, Tatiana offers Timon a hand in marriage, praising him for being her hero. However, because the duke refuses to accept Pumbaa as a member of the colony due to the rules that it should only be inhabited by meerkats, Timon chooses to stay with his new warthog friend. Because of that, he is forced to abandon Tatiana (and the power and riches) as the duke exiles him and Pumbaa from the colony. 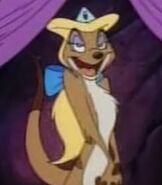 Timon and Tatiana in love

Tatiana cameo in "Timon in Love"