Disney Wiki
Register
Don't have an account?
Sign In
Advertisement
in: Locations, Beauty and the Beast locations, Buildings,
and 2 more

Gaston
The Tavern (called Le Pub in the blueprint concept art) is a location in Beauty and the Beast, located in the unnamed French Village. It is a hangout for Gaston (who presumably acted as the owner) and the villagers, and where Claudette, Laurette, and Paulette (a.k.a., the Bimbettes) find work as waitresses. It was located at the edge of the village near a bridge, at one of the town's fountains.

The main building from the exterior was three stories tall.

Inside, the only room we directly see is the main dining area, which is rather rustic-looking with a stone fireplace, all of Gaston's trophies mostly of animal antlers on the walls, and a large portrait of Gaston above the fireplace. It also has various wines as well as a brew barrel. Near the fireplace is a bear-skin rug (presumably done by Gaston) as well as a "throne" of sorts that is made of various animal skins and antlers. According to Gaston at one point, the antlers were the primary decoration of the tavern. The Tavern had "saloon" doors as well as a bar area. In addition, there were six circular tables, with at least four chandeliers, and a bench independent of the tables. It also had tankards for beer.

Any meals it serves besides beer, wine, and presumably eggs is never revealed in the movie or comics.

The tavern is first mentioned in one of the opening scenes of the movie, where Gaston invites Belle to a date at the tavern immediately, specifically to show her his trophies, but she procrastinates in an attempt to reject him, both because she doesn't like him and because she needs to get home to help her father with his latest project anyhow. In addition, earlier, Claudette, Laurette, and Paulette were seen getting pails of water from a pump that were presumably going to be used for making beer at the tavern.

The tavern makes its first on-screen appearance shortly after Belle surrenders to Beast as the latter's prisoner, where Gaston was still fuming about being rejected, dejected, and publicly humiliated by Belle (referring to his failed wedding which resulted in Belle knocking him into a mud puddle in front of the invited guests), as well as viewing himself as a disgrace as a result, resulting in the patrons and staff cheering him up by singing praises about him, with him joining in soon and eventually culminating with a bar fight. Shortly after the song's end, Maurice burst in and tried to get everyone to save Belle who had been locked up by a "monstrous Beast", only to be mocked as well as eventually "helped out" (or rather, thrown out) by the patrons at Gaston's request. This eventually resulted in Gaston coming up with the idea to get Belle to marry him by blackmailing Belle with falsely incarcerating Maurice at the Les Maison de Lunes insane asylum. He directly tells LeFou the plan with whispers, although it is implied that everyone at the tavern (with the possible exception of Claudette, Laurette, and Paulette) knew about and gave support for the plan.

The tavern appears again later that same night after Belle tends to the Beast's wounds, where it was closed to the public and empty save for Gaston, LeFou, and the warden of the asylum, Monsieur D'Arque, where they discuss the plan to get Maurice locked up as a means to force Belle to marry him. D'Arque ultimately agrees to the plot wholeheartedly, both because of his being bribed with money by Gaston, and because he loved the despicableness of the plot.

Beauty and the Beast Marvel Comics

The tavern (named Café in the third issue) appeared in only two issues. The first was at the end of the third issue, where Gaston was ranting about the failure of his attempted wife auction of luring Belle out in a similar manner to in the film, although he forgave Belle because he deduced she probably hadn't even heard of it (which ultimately turned out to be true, as she wasn't even in the village but at the Beast's castle). The second was in the seventh issue, where Gaston went over to the tavern to have a heaping of eggs, and returned to the Bookstore in the hopes of catching Belle as she's inside, only to find LeFou had been distracted from his duty due to the Bimbettes' interference (they had planned to make Gaston jealous to "give him a taste of his own medicine" for their jealousy of Belle being the object of his affections instead of his returning their love for him, but it failed largely because Gaston was only angry at LeFou for getting distracted and potentially having not seen Belle).

In Fantasyland at Walt Disney World's Magic Kingdom, there is a restaurant called Gaston's Tavern, which is modeled after this tavern.

The Tavern helps show some traits about Gaston, such as how one of the walls has Gaston's fist marked into it, from when he punched it after LeFou once beat him at darts.

The real-life tavern currently offers a limited menu, but the main entrée is the roasted pork shank and the signature drink is LeFou's brew; Gaston often says that LeFou is in the tavern's back room making the drinks for the guests.

Statue of Gaston an Lefou at Gaston's Tavern at the Magic Kingdom. 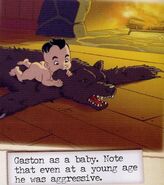 Gaston as a baby (Villain Files)