"You know what I love about me? I'm always something and pretty!"
Tawni Hart is the longest running cast member and the first member of So Random!, being a 7-year veteran. Her hometown is Hollywood and she has been acting since her first diaper commercial since she was 3 years old. Tawni almost had the same personality as Chad Dylan Cooper, only ever since he started dating Sonny Munroe, he was more kind and thoughtful, and Tawni is also more kind in the second season of "Sonny With A Chance".

She has an on and off friendship with Sonny Munroe. She is a self-absorbed, diva-type teenager who wants to have the spotlight to herself. She used to have a stuffed animal named Puddy Two-Shoes who was destroyed by when Sonny accidentally dropped him in a paper shredder in the first episode. She seems to have a crush on Eric in the fourth episode to then figure out that he was really Sonny. She is also very self-conscious, like wearing a bald cap when Sharona made fun of her in "Poll'd Apart". She also used to date James Conroy, only for it not ending very well. She also sometimes likes to make fun of Sonny's Costumes, like "Madge the Waitress" or "Baby Waa Waa". Tawni seems to be watching the show Tween Gladiators. It has always been a dream of Tawni's to be on a lunch box.

In "Sonny With a Chance of Dating", it was revealed that Tawni once got dumped by an actor named James Conroy, which made her wear polyester pants, And still has feeling for him.

In "Sonny and the Studio Brat", Tawni said that because Nico and Grady wore cheese pants in media, they never get invited to any Hollywood parties. Tawni decided to use the scene from the sketch "The Basement" to take some pictures of her, Nico, and Grady while dancing, which would make it look like they were at an exclusive club called "The Basement". Zora took the photos and uploaded them to the Internet.

The so far only known sketch that Tawni has written herself is "Queen Bee"; a sketch that was never made. They only rehearsed it once, and then it got dropped from the show to be replaced by Sonny's "Bumbling Bees/ Siss-Boom-Buzz" sketch.

Tawni is egocentric and spends a majority of her time thinking about how she looks. She is often talking about herself and how fabulous she is. One of her favorite things are mirrors, because she can see herself in them. Tawni loves Cocoa Moco Cocoa lipstick. Tawni's big weakness is if someone else, like Sonny, gets more attention or better criticism by the media. It can really eat away at her and can, in turn, cause her to do something drastic to herself. Like in "Poll'd Apart", where she wore a bald cap because Sharona said Sonny's hair was better than Tawni's. Tawni can become jealous easily, like when James, her ex-boyfriend, wanted to go out with Sonny in "Sonny With a Chance of Dating". She is likely to come through for her fellow cast members in a real time of need, though. She has also shown being very perceptive, seeing quite easily that Chad Dylan Cooper had "other motives" for wanting to stop Sonny and James' date, among other things. In Sonny With a Choice, Tawni treated Sonny like her best friend and comforted her after her break up with Chad.

In spite of Sonny's desire to be friends with her, Tawni has tried to ruin Sonny's self-confidence since they met, telling Sonny to stay out of her spotlight, making fun of Sonny's costumes (and clothes), and hiding Sonny's fanmail. She gets extremely jealous when Sonny receives positive attention.

In later episodes, they have starting to hang out more like friends. They share dressing room with each other. In "Sketchy Beginnings", Sonny gave her a stuffed animal as a gift to try to make peace, but Tawni shredded it. Later, Sonny accidentally destroyed Tawni's stuffed animal Puddy Two-Shoes in the paper shredder as well.

In "Sonny So Far" when Gilroy Smith tries to show the audience Sonny and Chad's private conversation, Tawni closes the TV because she remembered all that Sonny did for her and didn't want her to be embarrassed on tv, this shows that Tawni now cares for Sonny.

In "Promises, Prom-misses", Tawni told Sonny she looked really pretty in her prom dress. This may be the only complement Tawni has ever given to Sonny. Tawni also wanted to become prom queen in the same episode.

In "Falling for the Falls", Tawni said that her relationship with Sonny was the "best relationship she ever had". In "Sonny With a Secret", Tawni believed Sonny when Sonny said she wasn't lying about the stuff she was framed for.

In "Chad Without a Chance" it is revealed that Sonny breaks up with her boyfriends because she is gentler than Tawni.

It was revealed that she dated him in "Sonny With a Chance of Dating". When James dumped her, her face broke out and started wearing polyester pants. James later decided he wanted her back and sent her flowers, but Tawni was wise enough to discern that he only wanted her because he didn't have her.

In the episode "Guess Who's Coming to Guest Star", it is revealed that Chad and Tawni had a relationship at age six while they starred on The Goody Gangtogether. Not much is known about their relationship, though she did kiss him on the cheek at one point. She claims that falling in love with Chad is like getting the chicken pox. Since she fell in love with him as a kid, she cannot fall in love with him again.

It is apparent that Tawni and Chad hold no feelings for each other in the present day by the disgusted faces/comments Tawni commonly makes whenever Chad is trying to be romantic with Sonny.

Bennett is one of multiple guys that Tawni dates at a time. Though she does in fact like Bennett a lot. Even enough to put him on her "Absolutely Nots" list, which implies she will absolutely no break-up with him. She claims he is "the smartest guy [she's] ever dated" and is heartbroken when she finds out Chad mistakenly broke-up with him for her.

When Lucy, Sonny's friend from Wisconsin, visited, Tawni took her to Chad Dylan Cooper's party after Sonny hurt Lucy's feelings by lying to her about the party.

Tammi Hart is Tawni's mother and manager. The two of them have a disagreement in "Hart to Hart," but they resolve their conflict with the help of Sonny and Mrs. Munroe. Mother and daughter are very similar in personality and appearance. 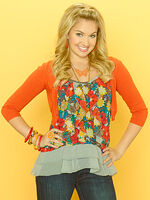 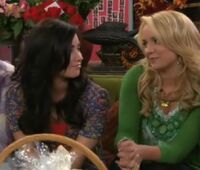 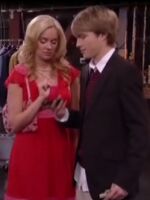 Add a photo to this gallery
Retrieved from "https://disney.fandom.com/wiki/Tawni_Hart?oldid=3526724"
Community content is available under CC-BY-SA unless otherwise noted.