Former peewee hockey coach Gordon Bombay is offered a chance to coach a Team USA in the Junior Goodwill Games. Team USA consists of many of the old District 5 Ducks, in addition to five new players with special talents.

The lure of celebrity becomes a distraction to Bombay, who begins to neglect the team. Fortunately, easy victories still come over Trinidad and Tobago and Italy in the double-elimination tournament.

Reality sets in when the team suffers an embarrassing 12-1 defeat at the hands of Team Iceland, coached by ex-NHL player Wolf "The Dentist" Stansson. Team USA plays badly, with Julie and Portman ejected from the game. Star center Adam Banks manages to score a goal but gets slashed in the wrist moments later. Frustrated, Bombay drives his players even harder, but they begin to suffer, completely exhausted. Eventually, the team's tutor, Michelle McKay, cancels their practice and confronts Bombay, while the players come across a street hockey team who teaches them how to play like "the real Team USA".

However, Bombay continues to suffer until one of his mentors, Jan, personally visits him, and reminds him of how he used to love the game. During a match against Team Germany, Bombay fails to arrive on time, forcing Charlie to tell the referee that Michelle is actually "Coach McKay". They play poorly, entering the third period tied, until Bombay shows up and apologizes for his behavior. Inspired by their coach's "return", the players come back to win the game and advance to the next round. The renewed Bombay finally realizes Adam's wrist injury, benching him despite his complaints. To fill the open roster spot, Charlie recruits street hockey player, Russ Tyler, whose unique "knucklepuck" (which rotates end over end toward its target as opposed to spinning about its centerline) secures USA's victory over Russia (who defeated Iceland earlier), advancing USA to the championship game for a rematch against Iceland. Before the game, Adam's injury is healed and returns to Team USA's locker room, only to find they already have a full roster. Charlie gives up his spot on the roster so Adam can play, cementing his position as the true team captain.

At first, Iceland appears to be out to dominate Team USA again, but they manage to score one goal. Unfortunately, the Ducks take penalties: Ken picks a fight with an Iceland player ("stick, gloves, shirt") after scoring the team's first goal, the Bash brothers celebrate this by fighting with the entire Iceland bench and Dwayne lassoes an opposing player, about to check Connie. Bombay is annoyed because "this isn't a hockey game, it's a circus."

After a motivational locker room speech from Bombay and new Duck jerseys from Jan, the team emerges rejuvenated. Now they are the USA Ducks playing against Iceland. The Ducks manage to tie the game when Russ outsmarts Team Iceland by disguising himself as Goldberg, so as to prevent himself from being covered and pulling off a successful "knucklepuck". The game is forced to go to a five-shot shootout. With a 4-3 score in favor of the Ducks, Gunner Stahl (the tournament's leading scorer) is Team Iceland's final shooter. Bombay knows Gunner favors shooting the glove side after a triple deke, and replaces Goldberg with Julie, who has a faster glove. Gunner advances on Julie and fires a hard slapshot. Although Julie falls to the ice, she slowly turns to look at her glove while the entire stadium (and presumably the home audience of millions) waits in breathless anticipation. She then opens her glove and drops the puck, signifying the game-winning save. With this, the Ducks triumph over Iceland to win the tournament. 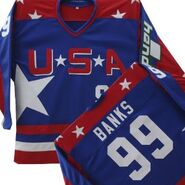 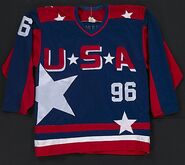 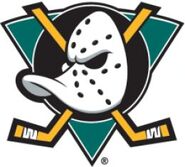 Add a photo to this gallery
Retrieved from "https://disney.fandom.com/wiki/Team_USA_(Junior_Goodwill_Games)?oldid=4060366"
Community content is available under CC-BY-SA unless otherwise noted.