Bob being a pest control specialist, not getting close to Spencer, Ivy hating her, putting up with Amy's "acting"

Theodora Rebecca "Teddy" Duncan is the main protagonist of the Disney Channel series Good Luck Charlie. She creates a video diary for Charlie to ensure that she survives their "special" family. She is the second child of Bob and Amy Duncan. She was portrayed by Bridgit Mendler.

Teddy is a kind, intelligent, creative, and responsible 15 to 19-year-old woman who cares about her family and friends. She loves to go shopping, hang out with her best friend, Ivy Wentz, and go to the movies. It is suggested that her favorite colors are blue and purple. Teddy gets excellent grades and excels in English, math, and science courses academically/universally. She also likes music. It is also suggested that she enjoys acting as she auditions for the role of Beauty in her school production of Beauty and the Beast, in which she was the Beast, and she was in her school's fourth grade production of The Sound of Music. It is unknown which part she plays but Bob finds a flier to her production. Based on her appearance and personality, she probably got the part of Liesl or Maria. Sometimes Ivy calls her "T". She is responsible intelligent creative and cares about her family and friends a lot. She loves to mostly hang out with Ivy a lot and go out to the movies or just go out and hang out with others...or maybe go to a house party sometime around.

Teddy can get easily distracted, especially if it comes to her high school crush, Spencer Walsh. However, she is sometimes shown to be jealous or angry. She got angry at PJ for bringing home the wrong baby from the park. She gets jealous when her best friend Ivy becomes "text mates" with her mother. She sometimes hides secrets from her parents in a few episodes. She also is easily embarrassed, especially by her family members.

Teddy blushes when Spencer's rich parents see her family members acting ridiculously on the local news. After admitting to being related to them, she actually burps out loud twice and can't deny who she is and confesses to frequently sweating, farting and burping. She can also be extremely sensitive about her grades. She gets upset and even a little mad when she gets her first B, even though Bs, which are 75% in high school grades, aren't that bad. She goes as far as even using Charlie just to please her teacher and get an A (90% in high school grades). In one episode, she angrily snaps the point of her teacher's pencil when he refuses to change her grade and ends up getting detention. She also gets mad at her ex-boyfriend, Derek, when he's not upset that she broke up with him, as she was expecting him to make a big deal out of it and beg her not to break up with him. Her catchphrase is "That's so unfair", based on people in her life being unfair.

It is not very well known for how she did for her S.A.T to get into her university, either at the University of Southern California or Yale University in New England, which is in the north-eastern U.S.

Teddy was born to Bob and Amy Duncan. When she turned two, she wanted a Howdy Puppy. She never got one, and still is upset about it.

Teddy has a study date with Spencer. But because of the annoyance of their family, their study date is always interrupted, which irritates her. Also, when Bob slips and falls down the stairs, she has to take care of Charlie while PJ drives Bob to the hospital and they both try to avoid Amy.

Teddy becomes jealous of Ivy when she becomes text mates with Amy.

A dance is approaching at school. Teddy asks Spencer out for the big night and Ivy asks Emmett out. She tries to get her first kiss from Spencer, but Emmett, who also likes her, distracts Spencer from her by hip-hop dancing with him. Eventually, however, she is able to kiss him in Emmett's grandfather's car.

Teddy lies to her mother that she liked her top and that he wanted to be with her more than Ivy. When she accidentally butt-dials Amy and she picks up, she didn't hear anyone so she put the phone down without turning it off. Amy hears everything when Teddy and Ivy were talking about how uncool she really is. The reason why Teddy pretended that Amy was cool was because that she wanted to see Dusk, (a parody of Twilight) although it was premiering on Thursday at midnight and Amy did not let her stay up late on school nights.

Teddy has long, blonde hair that she wears in loose waves most of the time. She is 5 feet, 5 inches tall. Most of the time she can be seen wearing her hair down. She can mostly be seen wearing boots, and she asks PJ for them for her sixteenth birthday. She usually wears jeans paired with a loose blouse or sequined tee and a long sweater. She has a slight boho fashion sense.

Teddy loves her mother. They have a strong bond. However, in some episodes, she lies and tricks her. She wants to see a midnight movie with Ivy and to trick Amy into letting her go, She hangs out with her for the day and tells her she's cool ("Butt Dialing Duncans"). She confesses to her that she wishes they wouldn't have had another baby ("Pushing Buttons"). She goes to her for advice about boys ("Snow Show, Part One").

Teddy and PJ have a common brother-sister relationship. They fight but they are always there for each other.

Teddy does not like that her dad is a pest control specialist. She says "he kills bugs for a living" ("Study Date"). However, she loves him very much. She wouldn't trick him into buying her a car like she had planned because she loves him too much ("Termite Queen").

Teddy has said she was kidding when she said she was never interested in him, so that means they have a strong bond. ("Study Date"). She helped him by pretending to be his mom, even though she failed. She did teach Charlie that the opposite of good was him, but she still shows her love for him. The same is for him when he and PJ make a rap for her 16th birthday, and before attempted to buy her shoes.

Teddy loves her little sister. She makes a video diary for her because she figures she won't be around when Charlie is older. She often takes care of her. Charlie loves her back.

Teddy once has a crush on Spencer. In Study Date, it seems him likes her back. They soon start dating. But this relationship ends when he is caught cheating on her at work with her soon to be friend Skyler. Soon after that they kiss, but they decide to just stay friends, but they seem to hate each other, calling each other a clump-nugget ("Battle of the Bands"). In "Can You Keep a Secret?", after kissing him, she gets back together with him.

Teddy and Ivy have been best friends for a long time. Their mothers are also friends. She sometimes doesn't trust her opinion.

When Emmett says their relationship with Teddy ended when he was dating Nina, she responds that their "relationship" was all in his head ("Pushing Buttons").

He gets her a job at Super Adventure Land as a princess. He also works there as a frog and they have to do a show together about The Frog Prince. When she has to kiss him in it, she invites him over so they can practice and see if they will feel anything between them. He gets scared that if they don't feel anything, then their relationship won't have a chance after she tries to be embarrassing and insane, so he leaves and quits his job ("Return to Super Adventure Land").

Teddy with her family in the title card of the show. 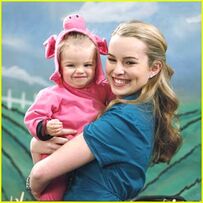 Teddy with Charlie in a piggy costume 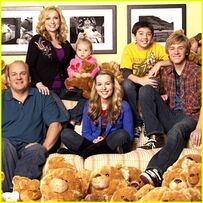 Teddy with her family 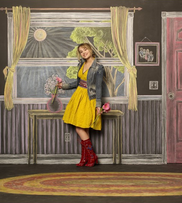 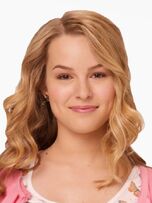 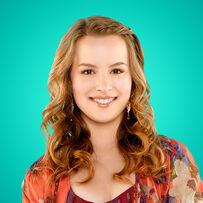 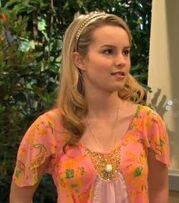