Ace
Theodore "Teddy" Newton is an American screenwriter, director, animator, storyboard artist, producer, and voice actor, who joined Pixar in 2002 to work on The Incredibles.

Newton was born in Encino, CA, but grew up in Dana Point, along the California coastline. He was inspired by the drawings of Al Hirschfeld and early Warner Bros. animation. Newton dropped out of CalArts in the early 90s and spent some time at Disney doing story sketch work on Pocahontas, Fantasia 2000, Runaway Brain, Mulan, and Hercules. Newton opted to leave Disney to pursue more creative opportunities.

Newton conceived the characters for DreamWorks Interactive’s Cooper McQ Breaks Thru. Other early works include writing and storyboarding an entire episode of Dexter’s Lab and doing inspirational boards and story development for The Stinky Cheese Man and Other Fairly Stupid Tales.

Newton formed a partnership with composer Michael Giacchino to make animated films, but they didn't have the capital to see it through. He then moved on to Warner Bros. Feature Animation and he partnered with Brad Bird on developing the story and characters for The Iron Giant.

He co-wrote and produced the live action feature The Trouble with Lou, which was screened at the Slamdance Festival in 2001. This was followed by the animated (and very adult) Boys Night Out, which Newton wrote, co-directed, and handled the art direction. It paid off as Boys Night Out received an Annie Award nomination for Outstanding Achievement in an Animated Short Subject.

In 2002, he joined Pixar and became the character designer for The Incredibles. Here’s what he said, as part of the production notes, about creating these now iconic characters, "Brad would simply describe the characters to me-he wouldn’t use too many adjectives, but he would often do an impression or a voice for them. Sometimes the voice alone would put enough pictures and ideas in my head. It’s like when you listen to the radio and you start to imagine what the person would look like. You get inspired and everything starts to take shape."

Newton stayed in the world of The Incredibles as he co-wrote the Jack-Jack Attack short based on one of his drawings of Jack-Jack that Bird loved.

He partnered with Bird again on Ratatouille and helped with character design on the amazing end credits (with production design by Nate Wragg and Bob Scott/Scott Morse on backgrounds). This continued on Your Friend the Rat, as Newton came up with all the gags and keyed out a lot of the animation for the hilarious short.

Most recently, Newton designed Alec and Presto for Presto. The decision was made that the characters would have an iconic look that viewers would immediately recognize and Newton delivered on this promise in spades. He also contributed character designs to Partly Cloudy. Newton's newest project is Day & Night, which played theatrically with Toy Story 3 and on its home video. He is credited as both the writer and director on this genre busting effort.

On November 29, 2012, Variety reported that Newton is directing an untitled project for Pixar with Derek Connolly writing the script. But in June, 2014, Disney's Lino DiSalvo posted a picture on Twitter showing himself, Paperman director John Kahrs and Newton touring the Paramount lot[1]. It was later announced DiSalvo had left Disney to become creative director for Paramount Animation, joining Kahrs and seemingly Newton at the studio. 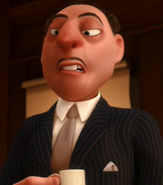 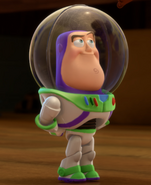