Flight
Terence is one of the male protagonists from the Disney Fairies films. He is a dust-keeper sparrow man and Tinker Bell's best friend. He is romantically infatuated towards Tinker Bell, however, she is oblivious of this.

Terence is generally calm and logical, who thinks things through carefully, unlike Tinkerbell. While he possesses a certain amount of simplistic wisdom, his advice is never overbearing, as seen when he subtly coerses Tink into telling him what he wants her to understand; that she should be proud of who she is. He is eager to help, sometimes to the point of being annoying, and is incredibly loyal to his friends. He enjoys playing games and helping Tinkerbell with her inventions, but he still takes his work as a Dust Keeper very seriously. Tinkerbell is shown to be incredibly fond of him, sometimes prefering his company over that of her other friends. He seems to have an eye for detail and appreciates beautiful things.

Terence pours fairy dust on Prilla in Fairy Dust and the Quest for the Egg. Later, he tries to impress Tinker Bell, but to no avail. He tests Prilla to see if she is a dust-talent, but she is not because she sneezes, and dust fairies cannot sneeze. During the hurricane, he is worried about Tink, but cannot do anything to help her. At the end, he makes Prilla an honorary dust-talent.

In The Trouble with Tink, Terence goes to see Tinker Bell like he usually does. He invites her to play fairy tag, where she drops her hammer and cannot find it later. The next day, he goes to see Tink again and starts to get worried when the pot for Violet that Tink had fixed starts to leak. Eventually, she tells Terence about what happened and how she was worried about going to see Peter Pan for her spare hammer. He offers to go with her. There, Peter pretends to mistake them for butterflies and gives Tink the spare hammer. At first, Terence does not like Peter, but then he cannot help but like him. They then go home and Terence wishes Tink good luck, as she is able to fix Queen Clarion's bathtub.

He appears briefly in Vidia and the Fairy Crown, when Queen Clarion's crown goes missing.

In Beck and the Great Berry Battle, Terence is having a hard time getting around since the Berry Battle. He is doing a good job at dodging berries, but one berry hit the pixie dust he was delivering. The pixie dust goes everywhere, causing bugs to fly, but Terence is not happy about wasting dust.

In Fairy Haven and the Quest for the Wand, he is so worried about Tink that he crosses the sea until he finds her. He makes a wish that Tink will like him romantically, but he feels bad about it later on since the relationship is forced. Later, when the wand is going out of control, he helps hold it down until Tink can fix it. At the end, the wish he made is reversed, but he is okay with it.

He dances next to Tinker Bell in Rani in the Mermaid Lagoon. At the Fairy Dance, he is paying more attention to Tinker Bell than the other fairies around him. He also helps save Rani from falling at the dance - it takes him, Tink and Fira to hold her up. He appears at the end, congratulating Rani on the fountain she makes.

Later in Fairies and the Quest for Never Land, Terence is very kind to Gwendolyn and goes with her and Tink to see Mother Dove. Terence goes on the quest with the other fairies, including Tinker Bell, for whom he would have gone on the quest anyway. He helps put the Kyto Keeper on Kyto while Gwendolyn and Vidia distract him. He and Tink try to save Gwendolyn's kiss necklace, but cannot. Also, he gave Gwendolyn a bag of pixie dust so she can return anytime she wants.

He appears briefly in Silvermist and the Ladybug Curse at the fairy picnic, playing games with the other fairies and sparrow men.

In this movie, his role is very minor. He is seen helping the other fairies by giving them their daily pixie dust rations. Upon hearing that Tink is unhappy with her talent, Terence informs Tink that she should be happy with who she is, having her realize that her talent is what keeps Pixie Hollow going.

In this movie, he becomes a main character. He is shown to be Tinker Bell's best friend and the two work together to build a scepter for Pixie Hollow's Autumn Revelry. He provides help and guidance for Tink and her friends. Also in this movie, it is shown that he has romantic feelings towards Tink.

In this film, Tink is given the honor of creating a ceremonial scepter for the Autumn Revelry to generate blue pixie dust. Terence attempts to help Tink in an attempt to spend more time with her, but he ends up gradually ticking her off, causing her to lose her temper and accidentally break the moonstone, which was to be the cornerstone of the scepter. In frustration, Tink tells Terence off, temporarily ending their friendship.

Silvermist calms Terence down and convinces him to allow Tink to do the same. When Terence visits Tink's house, he learns that she had ventured off to find the legendary Mirror of Incanta and goes off to find her. When he does, the two get chased by a pack of rats. With the help of Tink's new friend Blaze, the duo escape. Due to Tink accidentally using up the mirror's final wish, Terence offers to help fix the moonstone.

Once the stone and scepter are completed, he and Tink lead the Autumn Revelry to the Pixie Dust Tree. In the end, all is good and Tink is able to create a fantastical sight, far more impressive than what the moonstone would have showcased in its original state. Terence's friendship with Tink is renewed.

Unlike the last movie, his role is very small. He is only seen towards the beginning and end of the movie because he is delivering pixie dust to other fairy camps.

In this film, Terence once again plays a very small role. He makes a cameo appearance during the opening song and again at the end when Tinker Bell and Periwinkle save the Pixie Dust Tree.

Terence makes cameo appearances in this movie. He is seen with Fairy Gary when he is saying who will go get the blue Pixie Dust for the Pixie Dust Tree. He says his only line in this scene, with an additional yell when the plant grows over all of Pixie Hollow. He falls asleep with almost everyone else, due to the poppies. He, along with the other sleeping Fairies, wakes up, oblivious to what just happened.

Terence is among the many competing talents for the Pixie Hollow Games with Fairy Gary, the Headkeeper of the dust-talent fairies, as his team captain and partner. He is uncomfortable about having to wear a kilt like Fairy Gary does and complains about it to him after the first event. Terence and Fairy Gary make it to third place in the finals. However, during the race cart derby, they use the second shortcut (the pond) to pass the storm team, but land in the pond, causing them to be eliminated from the competition.

Terence debuted at the parks as a meetable character around the time of the release of Tinker Bell and the Lost Treasure to promote that film. He currently makes meet-and-greet appearances at Disneyland's Pixie Hollow. A topiary of Terence can be seen during the Epcot Flower and Garden Festival in the spring. In the Spring of 2010, Terence was featured in Fairies Primavera at Tokyo DisneySea.

Terence at one of the Disney parks 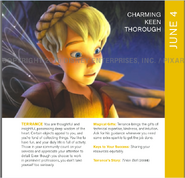 Terence in the credits

Impressed with the Moonstone