Elizabeth O'Rourke (2002-2008)
Terence Henry Stamp is an English actor. He is most noted for portraying General Zod in the first two Superman films. He also played Terrence Bundley in the 2008 comedy film Yes Man.

For Disney, he played Chancellor Valorum in Star Wars Episode I: The Phantom Menace and Ramsley in the 2003 Disney horror-comedy film The Haunted Mansion. 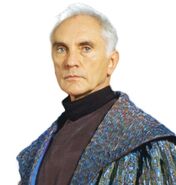 Ramsley
(The Haunted Mansion)
Add a photo to this gallery

Terence Stamp attending the 58th annual BFI London Film Festival in October 2014.
Add a photo to this gallery
Retrieved from "https://disney.fandom.com/wiki/Terence_Stamp?oldid=3944137"
Community content is available under CC-BY-SA unless otherwise noted.