Little Lady (by her mother)

“The fun has arrived! Thank you very much.”
―Terk, referring to herself

Terk is a major character in Disney's 1999 animated feature film, Tarzan. She is a rowdy, fun-loving gorilla and the best friend of Tarzan, her human adoptive cousin.

Terk acts as a "big sister" figure to Tarzan - protective, concerned, and absolutely convinced that Tarzan can't survive without her. Terk loves telling Tarzan what to do - that is until Tarzan's physical strength proves he can hold her in a headlock instead. Even though Terk is a bit bossy at times, Tarzan knows it's because Terk cares, though she will never say so willingly. She is also the best friend of Tantor, whose neurotic personality often frustrates the ape to no end, though she truly values him as a friend (even if she often takes advantage of him).

In the movie, Terk is first seen during "Two Worlds" where she is with her mother in a nest neighboring the one used by Kala, Kerchak, and their son. After Sabor kills Kerchak and Kala's son, Terk and the rest of the troop movement to a safer area. She is the first to spot Kala coming back with a human infant. When Terk first sees the baby she calls him "freaky looking", for which she is scolded by her mother. Terk asks Kala what the baby is and Kala tells her that he's a baby and puts him in Terk's arms to which Tarzan starts playing with Terk's hair. When Terk asks where the baby's mother is, Kala simply says she will be his mother now. Terk plays with the baby, saying 'he's not so bad when you get used to him'. As Kerchak, Kala's mate, and the leader of the gorillas come over and are shocked at the new arrival. Terk nervously hands the baby back to Kala and tells Kerchak that Kala's going to be the baby's new mother now. After Kerchak allows Kala to keep the baby, Terk asks Kala what she's going to call him, and Kala says that she's going to call him Tarzan. After that, Terk's mother picks her up and tells her that it's way past her nest time. Just before she went to sleep, Terk slid off her mother's belly, picked a leaf for a blanket, and climbed back on her belly.

A few years later when Tarzan grows into a young boy, he accidentally runs into Kerchak, but Terk manages to help Tarzan by acting that she was looking for him, and takes him away from Kerchak.

While trying to acquire the elephant hair, Tarzan is seen by the elephants and mistakenly assumed to be a piranha, causing the elephants to stampede in panic. Flynt and Mungo are able to outrun the elephant herd, but Terk is caught on a vine and is swung up onto a nearby branch, allowing the elephants to pass safely beneath her. She then returns for the unconscious Tarzan, pleading with him not to die as she drags him from the water. After regaining consciousness, Tarzan accepts responsibility for causing the stampede and is scolded by Kerchak, who openly proclaims that Tarzan will never be one of the family. Tarzan then resolves to become "the best ape ever," an endeavor in which Terk assists him.

For a while, Terk is clearly superior, but over time, Tarzan becomes stronger and more athletic (the only character observed to be able to swing from vines), and he also displays a higher degree of intelligence and ingenuity than the other gorillas. Years later, when Terk is a young adult, she, Tarzan, and Tantor are talking when Sabor appears and attacks the gorilla family. But Tarzan manages to fight the leopard, during which Terk and the other gorillas cheer him on. After defeating Sabor, Terk and the other gorillas cheer for Tarzan and Terk tells him not to make that into a habit because there are other ways to get attention. Then they hear gunshots in the distance and Terk along with Tantor follow the rest of the gorillas as they move deeper into the jungle while Tarzan sneaks off to find out what that sound is. Later on, Terk, Tantor, and some of the ape boys are out looking for Tarzan when they come across the humans' camp to which Tantor freaks out at the humans' stuff, but Terk replies, "These things aren't alive." Deeply curious, Terk, Tantor, and the ape boys use the humans' stuff to make up their own music (Trashin' the Camp song).

Then, Tarzan appears with one of the humans named Jane Porter and begins to play with Terk but then Terk stops when she sees Jane. However, Tarzan gestures to her in Gorilla Language, saying that it's safe. As Jane is about to pet Terk, Kerchak, Kala, and the other Gorillas appear and order Terk, Tarzan, and Tantor back to their nest as they hear Jane's father Professor Archimedes Q. Porter and their guide Clayton coming. At their nests, Terk listens as Kerchak orders the gorillas not to have anything to do with the humans much to Tarzan's dismay.

Wanting to learn more about the humans, Tarzan secretly sneaks back to the humans' camp to which Terk and Kala begin to worry. One day, Tarzan asks Terk if she and Tantor can distract Kerchak while he shows the humans the gorillas to which at first Terk rejects, though when Tarzan begs her, she agrees. She dresses up in Jane's dress while Tantor makes a puppet of Jane's father, and the two manage to distract Kerchak while Tarzan shows the humans the gorillas. During the distraction, Terk and Tantor accidentally lead Kerchak back to the gorillas' nests where Kerchak tries to attack the humans, though Tarzan manages to hold him off while the humans escape. Terk watches sadly as Kerchak scowls at Tarzan for betraying the family.

The next day Tarzan dresses in his biological father's clothes and decides to return to England with Jane, Porter, and Clayton to which Terk and Tantor try to catch him before he leaves and say good-bye but they're too late and sadly return to the Jungle. Then they hear Tarzan's cries from the ship to which Terk at first rejects to help but Tantor grabs her telling her that he's tired of her not wanting to help and they rush off to save Tarzan, Jane, and Porter who have been imprisoned in the ship's brig by Clayton and his men. After Tantor breaks into the brig, Tarzan jumps out and Terk hugs him but Tantor pulls her aside, telling her that sometimes she embarrasses him.

Then Terk, Jane, and Porter jump on Tantor's back and rush off to save the gorillas. After defeating Clayton and his men and rescuing the gorillas Terk watches sadly as Kerchak (who got shot by Clayton) accepts Tarzan as his son and tells him to lead the family and then dies to which Tarzan leads Terk and the other gorillas away to find a new nesting spot. The next day Terk watches happily as Jane and Porter decide to stay with Tarzan and are accepted into the Gorilla Family. In the end, Terk is seen swinging in the tree vines but loses her balance and falls off-screen.

In the TV series, Terk is a major character, appearing in most episodes, and is often the comic relief whilst the others often take more dramatic roles such as Tarzan, and even Tantor at times. She serves as the loud, humorous, big sister figure to both Tarzan and Jane, tagging along on most of the adventures, and often getting herself into comically painful situations in doing so.

She can sometimes be the cause of trouble, such as in "Tarzan and the Giant Beetles", where she accidentally spills a special potion created by the professor on a group of beetles, turning them into giant beasts. In "Tarzan and the Rift", Tantor's girlfriend Dania finds Terk to be obnoxious and forces him to choose between the ape or herself. In "Tarzan and the Beast from Below", she finds herself in situations rendering her as phobic as Tantor upon encountering a living velociraptor. This episode is also the only time Terk has been shown to fear anything to phobic extents.

In "Tarzan and the Enemy Within", Terk falls in love with a gorilla named Gobu and acts more lady-like in an attempt to impress him. However, Terk returns to her usual tomboy self after Gobu says that he likes her the way she is, stating that ruff and tumble gals have always been his favorite.

In the compilation sequel, Tarzan & Jane, Terk and Tantor join Jane in finding the perfect, one-year anniversary gift for Tarzan. As they do so, they reminisce of moments they've shared together in the jungle during the time period. Even so, their goal to find the perfect gift was futile, and they return to the treehouse to find Tarzan has thrown his own surprise party in honor of the occasion.

Terk appeared as a kid to find Tarzan with Tantor to defeat the horrible monster that the Zugor supposedly was.

In The Lion King 1½, if examined closely in the final scene, Terk has a silhouetted cameo appearance as one of the Disney characters sitting to watch Timon and Pumbaa's movie. 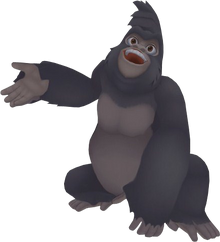 Terk has a minor role in the game. She lives in Deep Jungle. Terk is frightened upon coming face-to-face with Donald Duck. Terk drops a Gummi Block which is picked up by Donald. Terk later flees from the Heartless and runs into Jane. Terk helps save her from the Heartless. When Clayton imprisons Jane in the treetops, Terk is by her side. Terk is almost shot by Clayton while she is playing in the Tree House (Clayton defended himself by saying that he was aiming at a snake that slithered by).

After the defeat of Clayton, Terk witnesses Sora sealing the Keyhole. She seems to develop a soft spot for Donald and hugs him, but he protests, worried about what Daisy might say or do.

Unlike in the film, the gorillas don't speak, and Terk's only spoken line is a shocked yell at Donald.

In California, Terk is featured in the jungle-themed section of Mickey's Soundsational Parade, which performs "Trashin' the Camp" in her honor.

In the Magic Kingdom, Terk took part in the former Move It! Shake It! Celebrate It! Street Party.

In Japan, Terk appears in a segment of One Man's Dream II: The Magic Lives On! opposite King Louie from The Jungle Book. She sports a Hawaiian shirt and engages in a high-energy dance with Louie.

The Disney Wiki has a collection of images and media related to Terk.