Race To Save the Magic

Disney, Charlene, Being a DHI

Terry “Donnie” Maybeck: Maybeck is one effortlessly cool guy. He’s very popular with the girls at school – probably due to his sarcastic demeanor and sense of humor. He isn’t always enthusiastic about the DHI adventures and he likes to work alone. He sometimes reacts too quickly. His skepticism makes him the perfect devil’s advocate – Maybeck sees situations in ways the other Keepers don’t always consider. 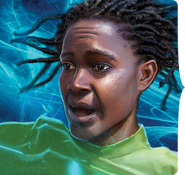 Maybeck on Disney After Dark