Active
"Terrifying" Terri and Terry Perry are the tritagonists of the 2013 Disney/Pixar animated film, Monsters University. They are yellow, four-armed conjoined twin monsters with opposing personalities and students at Monsters University as well as members of the Oozma Kappa fraternity.

When it comes to Terri and Terry, it's hard not to ask, "Are two heads really better than one?" These bickering brothers have little in common: Terri with an "I" is a real romantic who's quick to spot the silver lining in any situation, while older brother Terry with a "y" sports a more cynical outlook on life. If they can stop squabbling long enough to work with their Oozma Kappa brothers—they might be able to put their heads together—literally—and find their place in Monsters University's Scare Program once and for all.[1]

Terri and Terry are conjoined twins with completely opposite personalities, but they still love and respect each other. Terri is more energetic and eager than Terry, who is calmer and reserved. The two sometimes bicker, but work as a team during the Scare Games. After failing their scare exam, Terri changed to a dance major at MU, while Terry changed to an English major. Terri can dance and Terry can perform close-up magic.

Terri and Terry are a four-armed, two-headed monster who shares a lanky, squid-like body with yellow skin, horns, and orange stripes on their seven tentacles (Terry controls four, Terri controls three). Terri is the shorter twin and has one horn; Terry is the taller twin and has two horns. Both have one eye each, and buck teeth (though Terry's are almost always protruding from his mouth). They also wear a green sweatshirt with two neck holes for them and four sleeves.

In the first Scare Games challenge, the Toxicity Challenge, they both get pelted and swollen by the stinging glow urchins in the course. Later, when Mike talks to the group, they explain that they are very skilled with the arts of magic and illusion, although their demonstration is not convincing. During the next Scare Games challenge, the two help distract the librarian by shouting and dancing really loudly. At the ROR party, they are seen dancing with members of PNK before being humiliated, along with the other members of OK.

As discouraged as the others, Terri and Terry are seen back at the house, before Mike gets the group to show them Monsters, Inc. to get their spirits back up. After escaping the security guards with the others, the group is more enthusiastic than ever the next day to try to win the games. Ms. Squibbles also makes the twins a sweater with the OK symbol on it. The team keeps succeeding in the games, which lead up to the final event, where they all get to scare. When their turn comes up, they are up against Chet Alexander from the ROR team. When in the simulator, they use their talent of illusion to fool the child simulation into looking like a human. However, as they get closer, they reveal their true form and startle it.

After the team wins, they are celebrating with the others until Mike finds out that Sulley cheated to make Mike look good, and runs away heartbroken. However, when they find out that Mike went into the human world, they, along with the other OK members, try to save him. They distract the guards, allowing Sulley to go into the door that Mike went into. When Mike and Sulley return and are escorted by the CDA, Roz assures Terry that whatever happens to the two is up to Dean Hardscrabble.

When Mike and Sulley tell their fraternity brothers that they were expelled, Terry and Terri assure that the team has been let back into the scaring program, as Hardscrabble was impressed by their skills in the games. After the group says their final goodbyes to Mike and Sulley, they leave.

In the credits of the film, a scare card of Terry and Terri is seen, indicating that they eventually graduated and became scarers at Monsters, Inc.

Terri and Terry reappeared in the short film Party Central along with the other Oozma Kappa members.

Terri and Terry and the OK team practicing scaring with Mike

Terri & Terry and their friends hugging 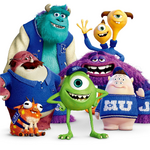 Terri and Terry in the OK yearbook photo

Concept art of Terri and Terry by Chris Sasaki 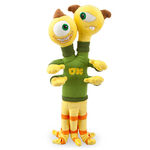