Tormenting students (Formerly)
Theresa (Terry) Cherry Perry, formerly called Principal Perry before her retirement, was the principal of Mission Creek High School in Lab Rats, but is now in the position of Head of Security at the Davenport Bionic Academy. She has been shown to treat her students very poorly, especially Adam, Bree, Chase and Leo. She also blackmailed Donald after she found out about the Lab Rats bionic secret, though lost her leverage after their secret got out. It is unknown who became principal at Mission Creek High School after her retirement, since the school will not be shown in Season 4.

She is a Principal at Mission Creek High School she worked part-time as a prison guard she was a "Jammer" on the North Pacific Roller Derby Championship Team until she a crash. She lives with five cats and a mother.

She grew up in a rivalry with her identical twin sister and got made fun of as a kid at school. Her fellow students made fun of her name; "Is Terry a boys' name? (Chip Switch)." Perry has had several side jobs, including the "Jammer" on the North Pacific Roller Derby Championship Team, a prison guard (though she was also in prison once), and a "flag lady", seen in The Bionic 500. She lives with her eight cats and mother. She loves tormenting kids and is Irish. It is also mentioned that she was a street fighter in Bangkok (You Posted What?!?).

Initially, Terry Perry absolutely loved tormenting the overall student body, showing that she is quite sadistic. She particularly enjoys tormenting Leo, along with Adam, Bree and Chase. She also loves calling people nicknames. Despite her rather tough demeanor, Perry is shown to be rather childish as she quivered in fear when her mother came by and pouted when Adam, Bree and Chase told her to simply stand guard. She also thinks she's very appealing to people, such as when she described herself as "hot rod" calendar girl in (The Bionic 500), and in (Spy Fly), when she tried to apply in beauty pageant, however, when they didn't accept her, she said "but my bikini tells a different story." There are numerous layers to her overall personality as she can be human at times and then resuming her mild sadistic personality. She loves blackmailing "Daddy Big Bucks" by saying that she's going to "spill the beans" about the "3 Bionic Freaks" (But now it's the "4 Bionic Freaks" because Leo got bionics in "You Posted What?!"). But when their secret is exposed she can't blackmail them, so she joined their side. She is also very flirty towards her crushes and calls them nicknames (just like everyone) and follows them around. Besides her bad nature, she did good things to the Davenport family, such as in (Twas the Mission Before Christmas), when she cooked dinner for them since she knew that she ruined their holiday. Even so, she still made them pay for the dinner. In addition, she will help the Lab Rats to an extent, but only if the situation is dangerous enough for her.

After on, Perry developed a soft side for the Lab Rats, to the point where she felt tormenting them brought her closer to them. When they left Mission Creek, Perry admitted to missing them, because tormenting them was the one thing that meant so much in her life, which led her to completely lose interest in tormenting other students.

In "Space Colony", Perry showed that she has become to love the Lab Rats deeply. As when Adam, Bree, Chase and Leo were taking on Krane and Gao while trying to rescue the space colonists, Perry could have ditched the Lab Rats and left in Davenport's spaceship, but stayed and waited for them to get on board. And when she thought Adam had died, she was heartbroken and comforted a grieving Bree. And was overjoyed to know he was alive. 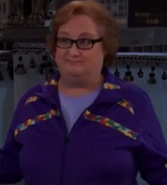 Retrieved from "https://disney.fandom.com/wiki/Terry_Perry?oldid=4303054"
Community content is available under CC-BY-SA unless otherwise noted.