To take care of everyone, especially all the friends at Starling Academy

Tessa is one of the twelve Star Darling students at Starling Academy and also one of the supporting characters and protagonists in Disney's Star Darlings.

From the time she began to sparkle, Tessa showed a love for gourmet meals! Tessa loves to take care of her sister, Gemma, and her friends. She's the nurturer of the group and encourages her friends every step of the way.

Tessa is described as being loyal to those she loves and has a deep connection with Starland's magical creatures. But she can be quite stubborn when it comes to settling arguments - she can be rather stubborn and is always convinced she's right. She doesn't deal well with change and is prone to exaggeration. She can be easily sidetracked. 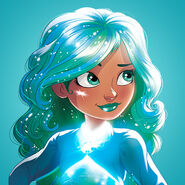 Tessa is named after Taurus (♉), the second of the twelve astrological signs of the zodiac, which means the bull.

Retrieved from "https://disney.fandom.com/wiki/Tessa?oldid=4214946"
Community content is available under CC-BY-SA unless otherwise noted.