2002–present
Tessa Thompson is an American actress, voice actress, singer, and musician, known for her roles in Creed, and the HBO series Westworld.

For Disney, she played Valkyrie in Thor: Ragnarok, Avengers: Endgame, and Thor: Love and Thunder, and voices Lady in the 2019 live-action adaptation of Lady and the Tramp.

Lady
(Lady and the Tramp;
2019 live-action adaptation)
Add a photo to this gallery

Tessa Thompson poses for a photo at the 2014 Sundance Film Fest.

Tessa Thompson at premiere of Thor: Rangarok in October 2017. 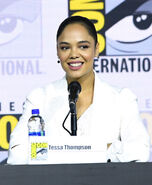 Tessa Thompson attending the 2020 Sundance Film Fest.
Add a photo to this gallery
Retrieved from "https://disney.fandom.com/wiki/Tessa_Thompson?oldid=3919191"
Community content is available under CC-BY-SA unless otherwise noted.