Gossiping, each other, completing each other sentences

Being apart, Pepper Ann stereotyping them

Tessa and Vanessa James are a supporting characters of the animated series Pepper Ann. They are twin girls who are friends with Pepper Ann Pearson and attend Hazelnut Middle School where they are reporters and gossip columnists.

Tessa and Vanessa are a pair of twins from Hazelnut, who attend middle school with Pepper Ann Pearson, Nicky Little and Milo Kamalani. They run the gossip column for the school paper due to their uncanny ability to somehow get the dirt on anyone. Unlike the other major recurring characters, who tend to be frenemies, Tessa and Vanessa are usually on good terms with Pepper Ann and her friends and are more likely to offer some kind of assistance, but usually for something in return.

In "Vanessa Less Tessa", they once had an angry split from each other that could only be solved if they just talked it out. Ironically, Pepper Ann's attempt to "help" them caused them to be driven further apart. However, they still consider her a good friend and hang out with her every now and then, though even their patience with her can sometimes be worn thin.

In "The Finale", it is established that in the series' version of 2013, they get married to another pair of twins named Terrence and Clarence and together have twin children each, implying that being twins is hereditary in their family. They apparently assume, somewhat correctly, that Pepper Ann has "gotten worse" emotionally over the years.

Tessa and Vanessa are always complimenting each other; praising each other's "perfection" while simultaneously praising their own. Their love for each other extends to their ability to complete each other's sentences which is almost their gimmick. They are usually very friendly, but also hide a determined spirit underneath. Being twins, there is not much difference between Tessa and Vanessa other than their clothing. When apart, they become inconsolable, but are able to bring themselves back together, that is if Pepper Ann is not involved.

Both girls are tall slender African-American girls who besides their shared face and split gap teeth have completely different fashion styles.

Tessa has black cornrows tied up into a knot on her head and large gold hoop earrings and matching bracelet. She wears an orange jersey with white lining and a giant 2, dark blue jeans and white sneakers, presumably basketball related.

Vanessa has orange fluffy hair and a pink hat with a yellow short sleeved shirt and denim dungarees and green sneakers. 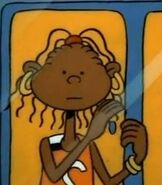 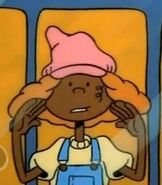