Disney Wiki
Register
Don't have an account?
Sign In
Advertisement
in: Objects, Weapons, The Avengers,
and 11 more
English

The Tesseract is an Infinity Stone and an Asgardian relic of ancient unlimited power, and was considered as "The Jewel of Odin's Treasure Room" by Johann Schmidt.

The Tesseract is an ancient Asgardian artifact of unimaginable power. It was kept in Odin's artifact chamber but came to Earth by accident. It was hidden in a Viking church in Norway and kept under the Tree of Life. In World War II, Johann Schmidt invaded the church and stole the Tesseract. He used the Tesseract to build extremely powerful weapons that disintegrated humans on touch (the weapons also severely damaged normal objects). Johann also used the Tesseract to make large bombs that could destroy capital cities. Johann held the Tesseract before he sent the missiles and it disintegrated (or maybe teleported to another dimension along with him) by touch. The cube fell in to the Arctic ocean and was found by S.H.I.E.L.D.'s creator Howard Stark some time later. The Tesseract was kept under guard by S.H.I.E.L.D. to make sure that it didn't fall in to the wrong hands. In 2011 Nick Fury called in Erik Selvig and asked him whether he would help S.H.I.E.L.D. with making the Tesseract an unlimited power source.

After falling into the abyss of space, Loki eventually comes into contact with the alien race of the Chitauri and their masters, Thanos and his servant "The Other". Loki promises to retrieve the Tesseract from Earth and give it to them in exchange for their army.

Around this time, S.H.I.E.L.D. is planning to use the Tesseract to create weapons of mass destruction so Earth can defend itself in the event of an attack by enemies from other worlds. This was due to the battle between Thor and Loki, however, according to Thor, their work with the tesseract was what drew Loki and the Chitauri to it.

About a year after Fury has recruited Dr. Selvig to study the Tesseract, he has now been notified that it is "misbehaving". Fury arrives at a Project P.E.G.A.S.U.S. where the Tesseract opens a portal into space and transports Loki to the S.H.I.E.L.D. base. Loki immediately begins slaughtering S.H.I.E.L.D. agents and reveals that he plans to use the Tesseract to enslave and rule over the human race. The power from the portal even creates an explosion that levels the entire nearby area.

After escaping, Loki has the mind-controlled Dr. Selvig begin to work on the Tesseract to build a device.

S.H.I.E.L.D. recruits Bruce Banner along with Tony Stark to trace the Tesseract as it is emitting small amounts of gamma radiation that only he would be able to trace.

Selvig and Loki later set up the Tesseract-powered device on top of Stark Tower and activate another portal which opens the door to the Chitauri fleet. Later Natasha Romanoff is told by Dr. Selvig, now free from Loki's mind control, that Loki's staff is able to shut off the portal.

After closing the portal, the Tesseract is taken back to Asgard along with Loki. Though his superiors are angry at this turn of events, Nick Fury defends his decision to allow Thor to take the Tesseract, saying that humanity is simply not at a level where we deserve the cube's power.

The Tesseract appeared on a video footage as The Collector was giving Star-Lord, Gamora, Rocket Raccoon, and Groot the history of the Infinity Stones.

The Tesseract appears in Thor's vision of the Infinity Stones and their connection in the previous years.

The Tesseract appears still in Odin's vault in Asgard until Loki took it prior to summoning Surtur.

The Tesseract was crushed by Thanos when Loki gave it up to save Thor, who victoriously put the Space Stone inside the Infinity Gauntlet. He would then use the Space Stone to travel to other planets in his quest to collect all the Infinity Stones, using it one last time to transport himself to Titan II.

Mar-Vell had gotten ahold of the Tesseract, which she used to create a faster-than-light engine in order to atone for the atrocities commited by her fellow Kree. When the engine explodes, the resulting explosion gives Carol Danvers her powers. At the end of the movie, the alien cat Goose retrieves the Tesseract, thus the Tesseract is once again in S.H.I.E.L.D.'s hands.

The Space Stone, along with the rest of the Infinity Stones, were destroyed by Thanos to prevent the snap from being reversed. Later, Tony Stark, Scott Lang, Steve Rogers and Bruce Banner travel to New York in the year 2012 to get the Tesseract after the battle during the mission to gather the Infinity Stones so they can reverse the snap, but bungle the job and the Loki from 2012 uses the Tesseract to escape. Steve and Tony later travel to the 1970s to steal another version along with more Pym Particles so they could return to the present.

Once they returned to the present, they used the Space Stone within the Tesseract, along with the other Infinity Stones, to revive everyone killed by the Snap. When they succeeded, the Avengers and their allies battled an alternate Thanos and his army which ended when Tony used the Space Stone and the other Infinity Stones to kill Thanos and his army, sacrificing his life in the progress. After the defeats of Thanos and his forces, Steve traveled back in time to return the version of the Tesseract they used to the 1970s before he decided to live the rest of his life with Peggy Carter.

After stealing the Tesseract, Loki transports himself to the Gobi Desert, where he is captured by the Time Variance Authority for deviating from his predetermined path. While Loki is taken in custody in the TVA headquarters, the cube is stored as evidence by a worker named Casey. Later, when Loki manages to escape from his captors, he threatens Casey demanding to have the Tesseract back, only to discover that there are multiple Infinity Stones stored in the TVA and that the powers of all the stones are rendered useless inside their facility. Since then, Loki is not seen with the Tesseract again, so it is presumed that he abandoned it at the TVA.

The Tesseract at the end of The Avengers.

Tesseract in Guardians of the Galaxy. 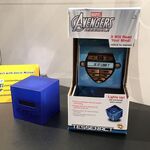