His stubbornness being challenged

“Why not I find the opera singer in the belly of a Whale, huh? I do it!”
―Tetti Tatti

Tetti-Tatti is a showman and the main antagonist of Disney's animated short, "The Whale Who Wanted To Sing At the Met", the final segment of the 1946 film, Make Mine Music.

He is described as over the top and dramatic. Upon hearing that a whale is seemingly able to sing opera, he immediately thinks that the whale must have swallowed a singer, and immediately arranges to go rescue them.

Professor Tetti-Tatti is the primary antagonist of the segment, "The Whale Who Wanted to Sing at the Met." However, his intentions are to save someone's life rather than cause any harm. He is an Opera theater director intent on killing Willie the Sperm Whale, who he believes has eaten an opera singer. Willie is actually a kind, gentle creature who only wants to become famous for his voice. Willie dreams of singing in the opera one day and practices for other creatures in the sea.

When Tetti-Tatti and his crew finally find Willie, everyone except Tetti-Tatti is captivated by Willie's voice who still doesn't understand that the whale himself is the one singing. After several attempts to shoot Wille with a harpoon are foiled by his crew, Tetti-Tatti seems to have finally seen the light when he becomes Willie's manager after the whale achieves his worldwide fame, performing in several of the world's most illustrious opera sheathes.

However, it is soon revealed that Tetti-Tatti was still intent on the idea that Willie swallowed an opera singer and he kills him anyway, much to the rage of his crew, who gang up to attack Tetti-Tatti. The narrator softens the blow by telling the audience not to be mad at Tetti-Tatti because he simply didn't understand, and also that Willie continues to sing in heaven. 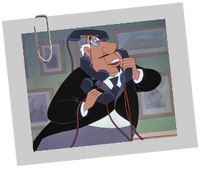 Tetti-Tatti having too much phone calls in a picture

Tetti-Tatti wonders how a whale can sing.

Tetti-Tatti about to shoot Willie.

Tetti-Tatti's "victory"
Add a photo to this gallery

Retrieved from "https://disney.fandom.com/wiki/Tetti-Tatti?oldid=4509305"
Community content is available under CC-BY-SA unless otherwise noted.