Getting his way, money, defeating the Muppets (formerly)

The Muppets (formerly), his minions failing him, not getting what he wants
Texleigh "Tex" Richman, simply known as Mr. Richman, is the main antagonist in the 2011 feature film, The Muppets. He devises a plan to raze the Muppet Studios and drill for oil beneath it.

Not much is known about Tex Richman's early life or why he is in the oil business. During his song "Let's Talk About Me", he reveals a tiny bit about his past.

During the spontaneous musical number, in the bridge that was deleted from the theatrical release, he recalls a heartbreaking story about his 10th birthday party. He thought it was going to be a great day. But the Muppets were putting on a show (it is unclear by what he meant by "the Muppets were there to put on a show"; they were either physically there or on TV). The other guests were laughing, but Tex himself did not know how to. Then, according to him, the guests turned around and laughed at him. Since then, he has hated the Muppets and does not understand why people find them funny.

Tex Richman is an oil tycoon who is the owner of Richman Oil. He plots to buy the Muppet Studios, claiming that he wants to turn it into a Muppet museum, but the truth is that he wants to destroy it and drill for oil that is underneath. He claims that he used to love the Muppets, but in reality (revealed partially in the operatic part of "Let's Talk About Me" which went unused in the film), he has never laughed and has always hated the Muppets ever since he was ten years old. He shows no sympathy for the Muppets and degrades them to their faces. Ironically, he has four Muppets as his "Evil Henchmen": Bobo the Bear, Uncle Deadly, and Statler and Waldorf.

Richman is physically incapable of laughing; any time he is in a situation where he wants to laugh, he says the words "maniacal laugh" repeatedly as a substitute for actual laughter.

The deal made was that if the Muppets could not raise $10,000,000 by midnight, they would lose both the studio and the Muppet name, stating that he would then give it to the Moopets.

Tex tries to sabotage the Muppet Telethon using several methods. First, he destroys a power box with an axe to cut off the electricity. This proves to be fixable, however, and the power soon comes back on. He then tries to cut an antenna, but is then foiled by a reformed Uncle Deadly, who makes Tex fall off the tower. Finally, he crashes the Muppets' car (mugging 80's Robot in the process) into a telephone pole, thereby cutting off the power right before midnight.

After the Muppet Telethon is over (and revealed to be a failure), he tells the "Artists Formerly Known as the Muppets" to leave his property. The Muppets leave, sad-hearted over the fact that Tex has won. However, the Muppets vow to get back on top despite all that has happened, stating that they'll restart their career as a family.

During the finale ("Life's a Happy Song"), he appears begrudged that the Muppets still have a huge crowd of fans cheering them on despite having lost the theater, hinted by the way he says, "Will you please stop singing? You've already sung this song." and he is never seen until the credits.

During the credits, Tex gets hit in the head by Gonzo's bowling ball that was supposed to be used for his "Head Bowling" stunt in the Telethon. This injury causes Tex to actually laugh for the first time (not just say the words "maniacal laugh), as he did several times earlier in the movie). He also has a change of heart, making the decision to give the Muppets back their studio and their name. According to a press release, this was due to a "change of heart and had nothing to do with the head injury". The Moopets were not happy and they demanded Richman to immediately pay them back as part of their "deal". Aside from that, he is also singing a part of Mahna Mahna during the credits. 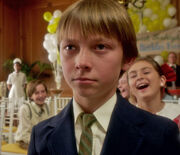 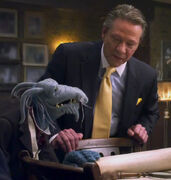 Tex Richman and Uncle Deadly, one of his "Evil Minions"

Tex and His Background Dancers singing "Let's Talk About Me"