Living forever, being separated from his family, danger, dark magic

“Take good care of Dani, Max. You'll never know how precious she is, until you lose her...”
―Binx advice to Max

Thackery Binx is one of the tritagonists in Hocus Pocus. He was transformed into an immortal black cat in the beginning of the film. During it, he finds himself growing attached to Dani Dennison.

Thackery was a 17th-century boy living with his parents and his sister Emily. One day, he followed her into the woods but was unable to rescue her from the three Witches, and after insulting Winifred, he was transformed into an immortal black cat. After the sisters were hanged, he was unrecognized by his family and was abandoned. At some point afterward, he decided to guard the house every Halloween night in order to prevent the sisters from returning.

In 1993, when a teenage boy named Max Dennison accidentally brought them back, he acted as a guide for him, his sister Dani, and his crush, Allison. During the adventure, he quickly takes a liking to Dani, and bonds with her. When the Sanderson Sisters disappear off the face of the earth at sunrise, his soul is freed. He leaves with Emily when saying goodbye to Max, Dani, and Allison.

Thackery is shown to be a caring, brave, and determined character, as he cares about his family, and also, after he loses Emily, he becomes determined not to fail anymore, no matter what it takes. He has also been shown to be a loving brother to her, as he was determined to save her from the sisters, even though he failed. He is also cautious, as demonstrated when expressing that the spellbook must be kept shut. During his time with the children, he becomes attached to Dani and cares about her.

In 1693, Thackery Binx notices his sister Emily taken away far from the woods by the Sanderson Sisters in fear. Arriving at the cottage, Thackery plans to rescue her from Winifred Sanderson and her sisters. As Thackery notices the Sandersons preparing a spell, he tips over the cauldron after noticing what the witches are doing. As the witches prepare an immortal spell, Binx is transformed into a black cat much to their devious plans. Afterwards, the Sanderson Sisters notice an angry mob outside the cottage just as Binx's father confronts the witches asking where his son is, unaware that they turned Binx into a black cat. Later as Binx approaches his family, his father doesn't recognize him thinking he is pestering him.

Three centuries later after the Sanderson Sisters are revived due to a Black Flame Candle being accidentally lit by Max Dennison, Binx (in his cat form) approaches Max and escorts him to escape from the Sanderson Sisters to which after the Dennisons escape, Binx explains about what Billy Butcherson's life was before his death. Later as it is found out that the cat talking to the two is revealed to be Thackery Binx, he explains to the Dennisons that he lost his sister Emily under the hands of Winifred, Mary, and Sarah and survived three centuries and was brought back to life, thanks to Max's plan in modern time. Standing by the grave of Emily, Max tries to ignite the spell book in order to break the curse, but Binx warns him that the book is protected by magic, indicating that book is impervious to fire. As soon as the Sanderson Sisters arrive, Binx leads the Dennisons to hide into the old Salem crypt to avoid getting caught by Winifred, her sisters, and the undead zombie Billy Butcherson.

Following Binx out of the crypt and escaping via manhole, Binx is suddenly run over by the bus the Sanderson Sisters boarded, but it is later found out that he is able to be brought back to life due to the immortality the Sanderson Sisters gave him via spell. With the Sanderson Sisters trapped, Binx tells Max about how precious his sister was before her death just as Max tells Binx to be part of the Dennison family to which Binx is welcomed to the family, much to the Dani's father and mother who are busy dancing during a Halloween party. Later while reading the spell book, Binx warns Allison and Max who are reading the book, warning that anyone who opens the book can result in bad things to happen. Furthermore, Binx is caught by the Sanderson Sisters to which Max, with help from Dani, manages to save him and escape from the witches.

Later, the sunrise arrives, Winifred, Sarah, and Mary all turn to stone with Binx's soul being released from his cat form after the curse is broken. Binx's ghost briefly talks with Dani just as Thackery happily reunites with Emily together.

In 2015, Binx made his Disney Parks debut in the opening of the Hocus Pocus Villain Spelltacular show during Mickey's Not-So-Scary Halloween Party at the Magic Kingdom, in which the Sanderson Sisters, newly returned, try to wreak havoc and create a Halloween party potion with assistance from multiple Disney Villains. He does not physically appear, although it can be assumed that his spirit has invisibly returned to give this short dialogue as a voice-over prior to the show:

"Good evening, friends. Tonight on All Hallow's Eve, your world and the magical world collide for but one night: A night filled with a new trick, a little treat, and a bit of... 'hocus pocus.'"

Thackery as a human

Thackery as a Black Cat

Thackery's final moments before passing away in black cat form

Binx thanks Dani and Max for freeing him

"I shall always be with you"

Thackery crossing over with Emily 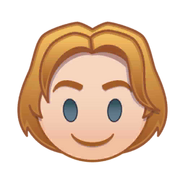 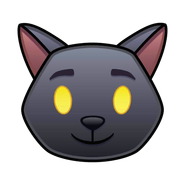