This article is about the 2010 live-action character. For the 1951 animated character, see March Hare.

Alice in Wonderland (2010)
Alice Through the Looking Glass

The March Hare from Alice's Adventures in Wonderland

In the film, he behaves as if he is constantly nerve-wracked and completely delirious. He is a cook in the film as well, and the way he eccentrically throws dishes and pots suggests he is an amalgam of both the March Hare and the cook from Lewis Carroll's original book. Thackery has a strong Scottish accent in the film, while his friend Tarrant Hightopp:switches into a Scottish accent whenever his emotions are strained.

Thackery is first seen in the "Tea Party" scene, which takes place at his "Hare House" windmill. He hosts a tea party, which he shares with Tarrant Highttop, Mally, and Chessur. When Alice arrives, Thackery participates in the conversation with Chessur and Mally to which the conversation becomes interrupted when the Knave of Hearts and an army of Armored Cards arrive, just as Thackery drinks his tea nervously. As the Knave arrives, Thackery offers him some cream to which the Knave doesn't respond. Thackery and Mally later stay together in the tea party while Tarrant takes Alice to the White Queen.

He then appears a second time in the White Queen's kitchen, frantically cooking and throwing dishes. Furthermore, he appears again at the Frabjous Day scene, in which he stands with the other characters wielding a ladle as his weapon, nervous and somewhat ready to go to battle (which Tim Burton stated that because Whitehouse is a great comedic actor, a lot of his lines came from improvisation). Fortunately, the battle stops when Alice slays the Jabberwocky. Following the arrests of the Red Queen and the Knave of Hearts, Thackery and the rest of Alice's friends watch Alice return to the real world.

Thackery returns in this film where Alice returns back to Underland during a conversation with the White Queen in Underland where it is explained that Tarrant Hightopp, the Mad Hatter, is in risk of dying. He then appears in a flashback watching Tarrant play fetch with Bayard where he finds a paper hat to remind him of his missing family during the Horunvendush Day event. When Alice returns and reports the sad news about the Hatter, Thackery and the rest of Alice's friends react in worry and fear that they would lose their best friend if he dies. Alice is then tasked to travel back in time to find the Hatter's missing family and save his life before he dies to which Alice and her friends travel to Time's Castle to help save the Hatter who is in the risk of dying by using a Chronosphere to travel to the past Horunvendush Day event and save the Hatter's family from death before it is too late, just as Alice's friends wish her good luck in helping save the Hatter.

A past version of Thackery appears amongst the crowd during the Toomalie Day event where she and the rest of the crowd felt worried about the failed coronation of Iracebeth. Another past version of Thackery appears when Time lands in a past event where she gets into a conversation with Time with the past versions of Mally and Tarrant to which Time loses his chance to stop Alice while being distracted by them. As Time returns to stop Alice, the past versions of Thackery, Mally, and Tarrant are unable to leave their seats just as the March Hare feels worried that it is tea time forever.

In the video game adaptation, Thackery is a playable character. His special ability is telekinesis, and his main form of attack is to throw teacups. He also uses his big feet and large ears as weapons. 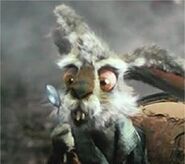