Jasma Sancere (fiance/wife)
Thad Rochefort-Chaise[3][4] (voiced by Rob Paulsen) is a fictional character from the animated series American Dragon: Jake Long. He is a famous soap opera star along with his fiancé Jasma Sancere. He only appears in Season 1 where he and Jasma eventually get married[5].

Thad is a tall and handsome young man with short and dark blond hair. Since he only appears at his own wedding ceremony, he is never seen wearing anything other than a white tuxedo suit. A purple bow tie and a pair of black shoes complementing his outfit.

Thad is a nice man who rarely shows any kind of emotional outburst, although, just like anyone else, he will get irritated when things do not go as planned. He can get annoyed with his fans (especially if they interfere with his wedding), as shown when the priest of the ceremony insisted on getting photos and autographs of his idols. He will act calm and collected most of time, a fact proven by the way he organized everyone to head to the hotel roof when the reception was ruined by emergency sprinklers.

In the unnamed soap opera series in which he holds the male leading role, Thad plays a man caught in a star-crossed relationship with Jasma. Throughout the show, he goes through many different and often ridiculous situations branded as stereotypes for this kind of show. He often portrays the role of a man-of-action that has to save his beloved from certain calamity.

It is also during the filming of the very first episode of the series[6] that Thad first met Jasma while The Hubba Hubba Hula (performed by Elvis Kamehameha) was playing at that time and became the couple's song.

Although most of the details concerning their wedding was kept secret, Thad and Jasma decided to have the event immortalized on national television. This caused a great hype within the fans of the show, who acted as though the wedding was another dramatic episode of the famous soap opera series. 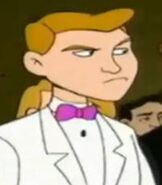