Agents of S.H.I.E.L.D.
The Avengers: Earth's Mightiest Heroes
Ultimate Spider-Man
Avengers Assemble
Hulk and the Agents of S.M.A.S.H.
The Falcon and the Winter Soldier (upcoming)

Going to pubs, his daughter, Hulk, his friend Iron Man

Threats to the world, Hulk (formerly), his daughter in danger, Abomination

Attends Tony Stark's funeral and abolishes the Sokovia Accords in gratitude for the Avengers bringing everyone back to life and killing Thanos.

"You should talk."
General Thaddeus "Thunderbolt" Ross is a character from Marvel Comics. He is an adversary of the Hulk turned military fighter. First appearing in the Universal Studios/Marvel's 2008 film The Incredible Hulk, he returns to the Marvel Cinematic Universe saga in followup films.

Thaddeus Ross was created by Stan Lee and Jack Kirby.

From years of fighting and tracking down the Hulk, Ross is an ambitious and obsessive man who will go to great lengths to accomplish his goals. He is quite ruthless, as he will try to capture the Hulk by any means necessary, even if this hurts himself, his family, or even his own career.

Upon learning that the World Security Council sought to free the Abomination, Sitwell summons Coulson to devise a plan to stop this. They needed someone so annoying and irritating that makes the General Ross not release Blonsky, that someone was Tony Stark.

While Ross was drinking in a bar, Tony arrives and says he needs to talk to him.

He also showed footage of the destruction and choas there intervention causes and tells them if they refuse to sign they are forced to retire.

To find Barnes, he gave Stark 24 hours to bring him in and was in charge of the Raft.

Avengers: Infinity War and Ant-Man and the Wasp

Thaddeus Ross appears in Infinity War in an holographic video call as the Avengers reunite at their HQ. Seeing the pro-Bucky Avengers reunited with the anti-Bucky Avengers, he orders James Rhodes to arrest everyone present, but Rhodes dismisses Ross, since Thanos' impeding invasion of Earth is the more pressing matter.

In Ant-Man and the Wasp, Scott Lang is in house arrest under orders of the FBI. It's never explained why Scott wasn't sent back to the Raft and why is the FBI taking care of someone who falls under the jurisdiction of the United Nations. Ross himself seems satisfied by Scott's fate and doesn't mention Scott during the events of Infinity War.

Thaddeus Ross, in legitimate mourning, attends Tony Stark's funeral, the implication being that he will abolish the Sokovia Accords in gratitude for the Avengers undoing the snap and killing Thanos.

At some point during his military career, General Ross was charged with capturing or destroying the Hulk. When he learned that Hulk is near Las Vegas, he moved his Hulkbuster forces there. Ross was inside the Hulkbuster Command Vehicle monitoring the battle against the Hulk. Ross was enraged when two agents from S.H.I.E.L.D. interfered in his mission.

He recklessly fired the missile on the Hulk while being distracted by two agents despite direct orders. The Hulk ultimately saved the two from the missile. Everyone in the scene was surprised including Ross. After Hulk also saved the shuttle from crashing, he was captured and taken to the Cube. Ross and his Hulkbuster Unit was ordered to stand down by Nick Fury.

Ross and the Hulkbuster Unit were in motion again when the Hulk left the Avengers. They almost captured him in Northern Canada but were stopped by Hawkeye and were forced to retreat.

To combat the Hulk, Winter Soldier injected a modified version of the Hulk's blood into Ross which turns him into the Red Hulk.

He then began a rampage which heavily damaged the Helicarrier, which attracted the Avengers and brawled with Hulk before leaving under Dell Rusk's orders. A decoy Ross was leading his Hulkbusters in order to protect his secret identity.

Ross then locked Banner in a higly-secured base. But Captain America and Iron Man convinced the President to clear his name and give orders to reluctant Ross to let him go. Somehow, Ross have his own plans, he planted a device on Banner so he could control him which he causes the latter to go Hulk and on the rampage. Seeing as an opportunity to join the Avengers, he showed up as the Red Hulk and took out the Hulk. After the fight, Red Hulk went to Cap and asked him if he can join the Avengers. On TV, he spent a week helping people trying to prove to be a better Hulk while his decoy did his part pretending to hate the Red Hulk on the press conference. Outside the Avengers Mansion, Iron Man gave Red Hulk an Avengers ID Card as a sign of being a new member in an official membership coronation. Cap who wasn't present there and instead was watching the membership coronation on screen, asked J.A.R.V.I.S. to get information about him but was interrupted when Red Hulk entered the room trying to convince him to accept him. After discovering Cap's intentions, Red Hulk have showed his teammates the footage of Cap in Banner's cell and made up a story that Cap's gonna free the Hulk. After they decided to stop Cap, Red Hulk then said "Avengers...assemble."

Red Hulk then led them to the Helicarrier and accused Cap for helping the Hulk not mentioning Wasp who was helping him. The argument quickly led to a brawl between the Hulk and Red Hulk. His true intentions were revealed after Cap removed the device and its remote. Red Hulk was quickly apprehended by being caught in a self-replicating high-density nanite compound implanted in his ID Card Iron Man cooked up just in case if he goes rogue. Red Hulk then reverted back to Ross, which shocks everyone but enrages Hulk who was more than eager to put him out of his misery for good but hesitates thanks to Cap. Ross was then locked up in his prison cell while he still ranting mad about the Hulk.

After Skaar arrived on Earth, Red Hulk took him down with a rocket and imprisoned him in an anti-gravity holding chamber. Skaar managed to escape, and Red Hulk took on Annihilus' bugs before being captured and sent to the Negative Zone.

Red Hulk is paired up with Captain America and Iron Fist by the Collector to help Spider-Man in a 'Capture the Flag' game. Spider-Man uses Red Hulk's heating ability to defeat Sandman, causing the Grandmaster to summon Blastaar and Ymir. While they make their way, Red Hulk attempts to thaw out Captain America after being frozen by Ymir only for Captain America to be removed from the game. During the fight at the docks, Red Hulk tries to take on Ymir only to be knocked down by Blastaar. Ymir then steps on Red Hulk, removing him from the game.

Red Hulk was first seen shackled to the ground by the Squadron Supreme. Later, Truman Marsh replaces Hulk with Red Hulk on the Avengers. Red Hulk asks the Avengers what they are going to smash first. 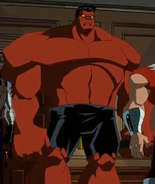 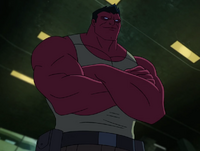 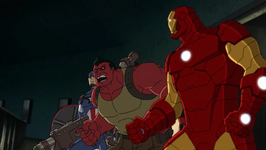 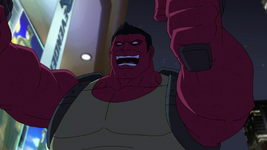 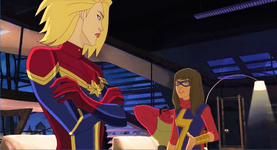 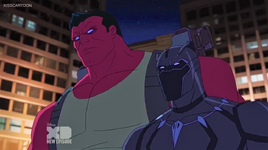 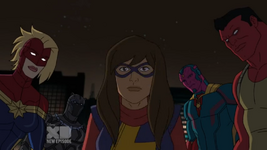 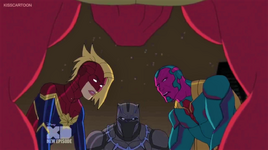 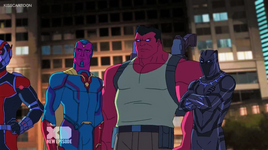 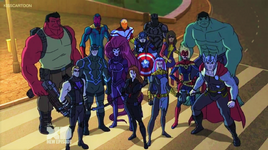 We Are The Mighty Avengers. 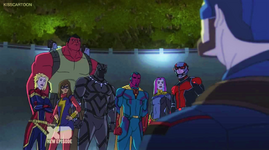 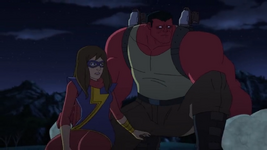 Retrieved from "https://disney.fandom.com/wiki/Thaddeus_Ross?oldid=3767795"
Community content is available under CC-BY-SA unless otherwise noted.