The Monster of Notre Dame

Goliath (genetic template)
Thailog is a clone of Goliath from Disney's Gargoyles created by Dr. Anton Sevarius, who has the morals and mental processes of Xanatos.

In personality, Thailog is Goliath's polar opposite: Thoroughly cunning and duplicitous, he will happily betray anybody for his own benefit, and not only does he display a complete lack of the Gargoyle instinct to protect; but actively seeks to inflict pain and suffering. He demonstrates sociopathy to an extent which dwarfs even Demona's, and at times seems completely aware of and at ease with his own evil nature. He also seems to have something of an Oedipus complex; both in his attempts to kill his "fathers", and in his choice for mates (first Demona, who was Goliath's past mate, and then Delilah, a genetic amalgamation of Demona and Elisa's DNA). He is a skilled trickster, rivaling Xanatos in his cunning and intellect.

Physically, Thailog is a perfect clone of Goliath, sharing the same silhouette, prodigious strength, and voice; although with altered pigmentation and markings because of his artificially-accelerated aging. As a result, his hair is pure white, his eyes are dark red, his skin is a dark purple/indigo shade, and his wing membranes are pale lilac. He often wears battle armor and a helmet, which he obtained after his escape from Black Rock Point, though at times, he has been seen without the armor or in other clothing, such as a Roman toga. Thailog's intellect and personality are the products of an artificially-accelerated growth process and subliminal education programming by Anton Sevarius and David Xanatos.

Thailog was conceived when a Steel Clan robot was activated by Xanatos for the specific purpose of opening wounds in Goliath's skin. Goliath destroyed the robot as Elisa looked on, but not before it scratched bloody lines down his chest. Owen Burnett showed up right on cue, and treated the wound, and in doing so, extracted blood samples, complete with DNA. He told Goliath and Elisa that the robot had activated due to a freak overload in its power matrix. They believed the lie, and the incident was forgotten.

An image of him can be seen on a television set in the episode "Upgrade".

Over the next 19 weeks, Thailog was grown in Sevarius' lab. His maturation process was accelerated, so he was essentially a newborn in an adult's body. He was also subliminally educated with Xanatos' unique "slant" on things, which included a well-developed business sense, a very keen and cunning mind, and a willingness to do anything for profit and to fulfill his own desires.

When Thailog was released, fully grown, he did not hold well with the fact that he was grown to be a pawn of Xanatos or as Sevarius' private guinea pig. He wanted to get out into the world and have the resources to do something with himself. He also wanted to see what his "father" Goliath was like. Using all his skill coming from his other "father" Xanatos, he concocted an ingenious plan.

Thailog drew Elisa Maza, whom he knew presumably had contact with Goliath through Xanatos' files, Broadway, and Lexington to Black Rock Point. He then assaulted them, and they, thinking he was Goliath, confronted Goliath about it later at the clocktower. The Manhattan Clan decided to investigate. Thailog manipulated Xanatos and Sevarius into coming to the oil rig offshore Black Rock Point, where he captured the two men who were arguing over Thailog's disappearance, Xanatos thinking Sevarius had betrayed him, Sevarius thinking he was acting under Xanatos' orders. Thailog also captured Goliath and Elisa who were investigating Xanatos' interests in the oil rig.

Xanatos and Goliath encouraged him to join their respective parties, but Thailog did not want to live on Xanatos' terms or join the Manhattan Clan merely to protect a city infested with "inferior humans". He planned to destroy all of his "fathers" in a blaze of glory, setting the oil tanker ablaze and leaving him with 20 million dollars of ransom money to see his dreams through. He then left them to die.

The group managed to escape but Goliath came back to try and convince Thailog one last time to join him. Thailog responded by trying to fight him, and in the ensuing struggle, they set the entire rig ablaze. Goliath was blown off the rig in an explosion, unable to reach Thailog, and he presumed him dead, to his sorrow.

Later that week, it occurred to Xanatos that if he had been in that same position, he would've come up with a contingency plan, which meant that Thailog may have faked his own death, and gotten away clean with 20 million dollars of his money.

Weeks later, Goliath and the Avalon travelers met Thailog in Paris. He and Demona had taken each other as mates, and had plotted to capture MacBeth to inherit his wealth. Together, Thailog and Demona had formed Nightstone Unlimited. However, Thailog secretly double-crossed Demona and handed Macbeth a weapon, expecting both of them to kill each so he could inherit both their fortunes and make himself financially on par with Xanatos. Elisa managed to prevent this from happening by shooting Macbeth, which didn't kill them because the Weird Sisters' spell made it so that Macbeth and Demona can die by each other's hand. Demona escaped with Thailog, unaware of his betrayal.

Thailog and Demona later re-appeared, this time teamed with Sevarius, in order to clone the Manhattan Clan and persuade Angela to join her mother and the Clones. When Demona betrayed Thailog in order to save her daughter, he revealed a clone he'd secretly commissioned Sevarius to make, Delilah, formed from both Demona and Elisa's DNA. Demona and Thailog battled all over Coney Island, and were each trapped in a blaze accidentally started by Thailog's temporary ally, Fang.

Thailog later stormed the Labyrinth and reclaimed control of all the clones except Delilah, who was at a party with Goliath. He and the clones overtook Claw and he nearly crushed Maggie the Cat beneath rubble. Leaving with the clones, he crashed the party at Wyvern Castle where he stabbed Goliath in the stomach, nearly killing him. He and the clones did battle with the Manhattan Clan, wherein he cut every member of the clan, including Elisa. Delilah appeared and commanded the fighting to cease. Telling Goliath and Thailog that they had both used her, she decided she would return to the Labyrinth without either of them, and all the clones except Brentwood decided to join her.

Thailog gave the weapon with the blood of each member of the Manhattan Clan to Sevarius who seems to be working for Thailog again. Shari entered and revealed herself to Thailog as a high-ranking member of the Illuminati and offered her services as his assistant. Thailog, also a member of the secret society, accepted.

At Thailog's request, Shari told him the story of how Goliath failed to bring Coldstone back to the Manhattan Clan. When Shari implied that Goliath's adventure may not have been entirely fruitless, he grew enraged and would have beaten her, but the sun rose and he turned to stone. 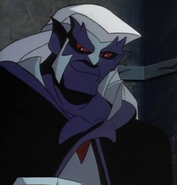 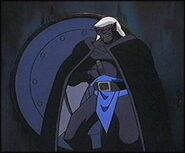 Thailog without the armor.