English
That Darn Cat! is a 1965 American Walt Disney Productions feature film starring Hayley Mills and Dean Jones, starring in his first film for Disney in a story about bank robbers, a kidnapping and a mischievous cat. The film was based on the book Undercover Cat by Gordon and Mildred Gordon and was directed by Robert Stevenson. The title song was written by Robert and Richard Sherman and sung by Bobby Darin. For the soundtrack album, however, Louis Prima (who in the future would portray King Louie from the Jungle Book) was heard singing the title song. That Darn Cat! was the last of six films Hayley Mills made for the Disney Studios. The 1997 remake featured a cameo appearance by Dean Jones.

"That Darn Cat" or "D.C." is a wily, adventurous Siamese tomcat who lives with two young women, suburbanite sisters Ingrid (Dorothy Provine) and Patti Randall (Hayley Mills), whose parents are traveling abroad at the time of the story. One night, while making his rounds around town, teasing Blitzy the Bulldog as usual, D.C. follows Iggy (Frank Gorshin), a bank robber, to an apartment where he and his partner Dan (Neville Brand) are holding bank employee Margaret Miller (Grayson Hall) hostage, calling her "Moms" in the process. The robbers let the cat in and feed him. When Margaret is alone for a moment, she scratches "help" into the wristband of her watch, places it around the cat's neck, and releases him into the outdoors. At home, Patti discovers the watch and calls the FBI. Supervisor Newton (Richard Eastham) assigns Zeke Kelso (Dean Jones) to follow D.C. in hopes he will lead them back to the robbers' hideout. Kelso sets up a headquarters in the Randalls' house and assigns a team to keep the cat under surveillance, but D.C. manages to elude them. Eventually a bugging device is implanted in D.C.'s collar and the cat leads Zeke into a comical chase at a drive-in movie and several backyards. Eventually, Patti and Zeke rescue Margaret and bring the robbers to justice. A subplot involves a romance between Patti's sister Ingrid and Gregory Benson (Roddy McDowall), Blitzy's master. Cast includes Elsa Lanchester and William Demarest as nosey neighbors, the MacDougalls; Ed Wynn as Mr. Hofstedder, Richard Deacon as a drive-in theater manager, Liam Sullivan as Graham, Iris Adrian as the landlady, and Tom Lowell as Patti's boyfriend Canoe Henderson.

The exterior neighborhood scenes were filmed on the Walt Disney Studios backlot in Burbank, California.

Each of the Seal Point Siamese cats who collectively play the role of DC, are so-called "traditional" or "old style" Siamese, as opposed to the more dainty, long and tubular modern Siamese show cats. One of the cats used for the movie belonged to a longtime cat breeder Edith Williams, a member of the Stud Book Fanciers Association. One of the feline actors also starred, along with two dogs, in Disney's 1963 film The Incredible Journey. 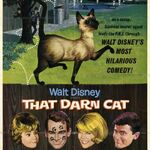 Retrieved from "https://disney.fandom.com/wiki/That_Darn_Cat!_(1965_film)?oldid=4017866"
Community content is available under CC-BY-SA unless otherwise noted.