$18,301,610
That Darn Cat is a 1997 film starring Christina Ricci and Doug E. Doug. It is a remake of the 1965 eponymous film, which in turn was based on the book Undercover Cat by Gordon and Mildred Gordon.

A pair of bumbling kidnappers break into the house of the president with the intention of kidnapping his wife and holding her for ransom. Things do not go according to plan when they mistakenly kidnap house maid Lizzie instead.

Patti Randall is a bored and angry teenage girl who is sick of her quiet and boring town of Edgefield, Massachusetts just 60 miles from Boston. She wishes for more adventure and excitement to come to her boring town. Her parents are unhappy at the way Patti acts and dresses. Every night D.C. leaves at 8 and harasses the neighborhood (such as tricking the dog and eating the dog food or playing with a birdcage while a geriatric and senile old lady orders travel packages).

Meanwhile Patti gets her wish when D.C. walks into the kidnappers' hideout during his nightly prowl. Lizzie gives the cat a watch with "HEll" scribbled on it. She intended to fully write "HELP" on it, but had to nix on finishing and quickly put it on DC in such way to avoid being caught when the kidnappers' phone rings near her. Patti sees the watch the next morning and immediately puts it together that the watch was from Lizzie and was meant to say HELP. But nobody believes Patti, causing her to doctor the evidence by turning the last L on the watch into a P. She then goes to Boston and pleads her case to Agent Zeke Kelso at the FBI and he believes her.

Zeke's captain allows Zeke and his agent to tail DC during his prowl in hopes of being led to the kidnappers and Lizzie. The operation goes nowhere, causing Zeke to be taken off the case. Zeke and Patti continue investigating anyway, which leads to nothing but dead ends and eventually ends with them being arrested. Patti's manipulation of the watch evidence gets exposed shortly thereafter.

As punishment for her actions Patti is grounded by her parents. She is so distraught that she decides to run away and leave town. Through having met someone at the train station who is leaving for the same reasons as her, and through a personal conversation, she eventually comes to her senses and decides not to board the next train out of town. Patti sees DC digging through the town garden on her walk back from the train station. DC takes off and Patti chases him. The cat leads her to the kidnappers' hideout, where they find Lizzie bound and gagged with duct tape.

Patti calls Zeke to let him know that she has found Lizzie. But Zeke is still upset with Patti, and does not want to hear it. This causes Patti and DC to enter the kidnappers' hideout. Patti attempts to rescue Lizzie, but she fails and in the process gets herself and DC captured, as the kidnappers show up and surprise her.

Zeke decides to re-open the case after he gets a call from Patti's parents asking if he has seen her since she went missing. Zeke investigates and follows a trail that leads him to the kidnappers. He finds Lizzie, Patti, and DC bound and gagged; Lizzie and Patti tied to chairs with their mouths duct taped, while DC sat in a litter box trapped inside a burlap sack with black cloth over his eyes.

Zeke exposes the identities of the kidnappers as the seemingly harmless Ma and Pa. Ma and Pa kidnapped Lizzie because they partied away all their cash in Monte Carlo and the Riviera, plus they were also bored out of their skulls. Zeke manages to free Patti and DC while Ma and Pa escape with Lizzie in their possession. A final chase ensues as Zeke, Patti, and DC attempt to catch Ma and Pa and rescue Lizzie. Fortunately Ma and Pa`s car had been sabotaged by Rollo, while it was undergoing repairs at Dusty`s car repair workshop and was unable to do right turns, resulting in Ma and Pa having to do a series of crazy left roundabout journeys around the town. During the chase, Spike the dog escapes after the bumper of Ma and Pa`s car breaks down his fence and he runs at the cat show, which causes all the cats to run out. DC joins them and run up the roof tops of each building, DC and the cats jump off and land on Ma and Pa's car, causing them to crash, totally writing off their car.

Ma and Pa are arrested, Lizzie is reunited with the President and his Wife, Patti and DC are nominated as heroes. Patti is later reunited with her parents. After everything is back to normal, Dusty and Rollo the two rival car repairmen are now working together, Melvin and Lu end up together. Patti has also become Zeke's partner, DC has married the cat he saw in the window earlier, and they have kittens.

Title sequences were produced by Pacific Titles & Optical. Animal Makers created the animatronic version of the cat. Buena Vista Home Entertainment distributed the video in most regions, while Abril Vídeo covered Brazil. It was filmed using a 35mm camera for both the colored moving and black and white still pictures. The aspect ratio of the film was 1.85:1. The film was shot in three main locations, 1) Aiken, South Carolina, 2) Augusta, Georgia and 3) Edgefield, South Carolina.

The film earned Ricci two award nominations in 1998. The first was for a Kids Choice Awards for favorite movie actress and the second was for a Young Artist Award, Best Performance in a feature film - Leading actress. 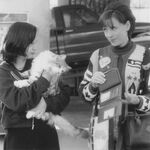