The Adventures of André & Wally B.

The Adventures of André & Wally B. is a 1984 computer-animated short produced by The Graphics Group, a subsidiary of Lucasfilm, which was later renamed "Pixar" before being spun off as a separate company. Although it is technically not a Pixar short, the animation was by John Lasseter (originally for his son), who was working on his first computer animated project and would move on to be a pivotal player at Pixar. The animation was groundbreaking for the time and helped spark the film industry's interest in computer animation. This film was released on July 25, 1984, at SIGGRAPH in Minneapolis.[1]

The short involves a character named André being awakened in a forest by a pesky bee named Wally B. André distracts the bee so that he can run away. Wally B. chases André and eventually catches up with him, then stings him offscreen. Wally B. later reappears with a bent stinger. Soon, though, Wally B. gets hit by André's tossed hat as a last laugh.

The credits for the piece are concept/direction Alvy Ray Smith, animation John Lasseter, technical lead Bill Reeves, technical contributions by Tom Duff (who designed the animation program called "md", short for "motion doctor"), Eben Ostby, Rob Cook, Loren Carpenter, Ed Catmull, David Salesin, Tom Porter, and Sam Leffler, filming by David DiFrancesco, Tom Noggle, and Don Conway, and computer logistics by Craig Good. The title is a tribute to the 1981 film My Dinner with André, starring Andre Gregory and Wallace Shawn. It was originally entitled My Breakfast with André, about waking up with an android.[2]

The animation on this short was truly groundbreaking at the time, featuring the first use of motion blur in CG animation and complex 3D backgrounds, where the lighting styles and colors were inspired by Maxfield Parrish, made using particle systems. Lasseter pushed the envelope by asking for manipulatable shapes capable of the squash and stretch style, as earlier CG models had generally been restricted to rigid geometric shapes. It was rendered on a Cray X-MP/48 supercomputer and ten VAX-11/750 superminicomputers from Project Athena.

The film premiered on July 25, 1984, in Minneapolis at the annual SIGGRAPH conference,[1] though 2 shots or about 6 seconds of the film were incomplete and made of pencil test line drawings over the completed backgrounds.[3] The final rendering of the film was released a month later, on August 17 at Toronto's International Animation Festival.[1]

It was released for home video in the collections Tiny Toy Stories and Pixar Short Films Collection, Volume 1 (DVD/Blu-Ray). 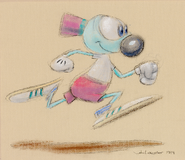 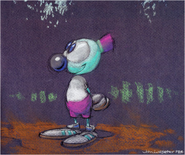 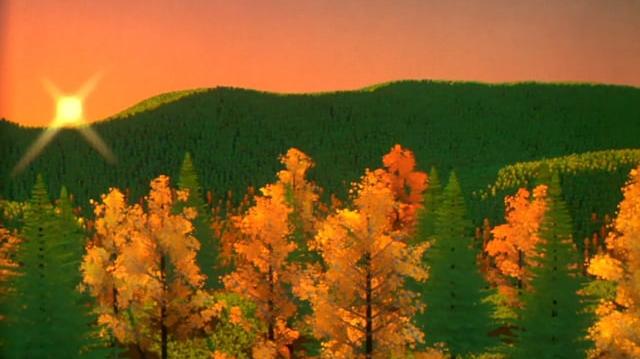 Retrieved from "https://disney.fandom.com/wiki/The_Adventures_of_André_%26_Wally_B.?oldid=4335377"
Community content is available under CC-BY-SA unless otherwise noted.