"The Adventures of Chip 'n' Dale" (also known as "Mixed Nuts") is an episode of Walt Disney Presents.

Walt has left a message on a tape recorder on his desk, explaining that because he is unable to be there personally, he arranged for guest hosts - Chip and Dale to fill in. The two chipmunks have a book with them filled with stories of their exploits. 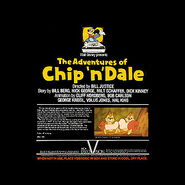 the back of the vhs cover
Add a photo to this gallery
Retrieved from "https://disney.fandom.com/wiki/The_Adventures_of_Chip_%27n%27_Dale?oldid=4104227"
Community content is available under CC-BY-SA unless otherwise noted.