The Amazon Awakens is a 1944 short animated/live-action documentary film produced by Walt Disney for for the U.S. Coordinator of Inter-American Affairs. It was released on May 29, 1944.

The history of the Amazon basin beginning with European exploration in 1541. Richly detailed animated sequences depict historic events in the settlement and development of the vast river basin. Travelogue-style photography and narration describe exotic plant and animal life along the river. A series of profiles report on the modernizing cities and contemporary resource extraction occurring along the river. The industries of Iquitos, Peru, including Tagua nut button-making, mahogany lumber, quinine production, and the production of rotenone from Barbasco root are described. At Manaus, Brazil the prosperous, modern amenities of the city are shown along with the rubber industry of the surrounding jungle. The process of harvesting and processing latex in the field, then to Manau for finishing and shipping to market is shown. The Boa Vista experimental agricultural colony demonstrates the clearing of jungle for cultivation by small farming families. Fordlandia, Brazil, a city constructed by Henry Ford for the development of vast rubber plantations is shown as a model planned community for workers. Housing, schools, hygienic living and health care are praised. A detailed discussion of rubber tree grafting practices for superior production and disease resistance follows. Belem, Brazil, the working seaport ships the products of the Amazon basin to the world. Narration concludes "this great fertile valley is the challenge and the hope of the new world. A paradise of riches beyond man's wildest dreams." 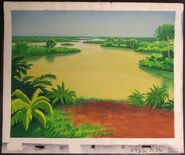 Retrieved from "https://disney.fandom.com/wiki/The_Amazon_Awakens?oldid=2998586"
Community content is available under CC-BY-SA unless otherwise noted.