The Art of Brave

The Art of Brave

Brave
The Art of Brave is the official concept art book of the Pixar animated film Brave. It is published by Chronicle Books on May 30, 2012, and written by animation story artist Jenny Lerew. It has a foreword by directors Brenda Chapman and Mark Andrews, as well as a preface by John Lasseter.

Brave is Pixar's thirteenth feature film, but it marks two big firsts for the award-winning animation studio. It's Pixar's first feature film driven by a female lead and its first set in an ancient historical period. Against a backdrop of castles, forests, and highlands, Brave follows the fiery Merida as she clashes with the duty of her royal life and embarks on a journey through the rugged landscape of the dark ages of Scotland. At once epic and intimate, the latest Pixar masterpiece weaves a story of magic, danger, and adventure and the fierce bonds of family.

Featuring behind-the-scenes interviews with the film's many artists and filmmakers, The Art of Brave showcases the gorgeous concept art that went into the making of this movie, including color scripts, storyboards, character studies, environment art, sculpts, and more. A foreword by Brenda Chapman and Mark Andrews, the film's directors, and a preface by chief creative officer John Lasseter shed light on the creation of this landmark film. 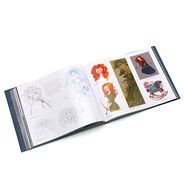 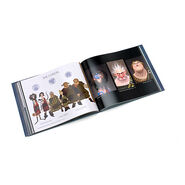 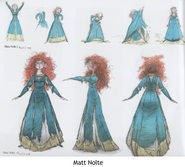