Officer Duck
The Autograph Hound is a 1939 American Donald Duck cartoon which features Donald Duck as an autograph hunter in Hollywood, California. Many celebrities from the 1930s are featured. This is the first cartoon where Donald Duck is featured in his blue sailor hat.

Donald Duck tries to enter a Hollywood studio so he can search for celebrities willing to sign their autograph. A police officer with an Irish accent guarding the gate prevents him from entering the building. Donald manages to sneak inside by climbing on the limousine with Greta Garbo so that it seems he's riding along with her. The police officer discovers he's been fooled and chases Donald, who enters a room with the name "Mickey Rooney" on it. Inside, Mickey Rooney is dressing up in front of the mirror, when Donald asks him for his autograph. Rooney writes his name in Donald's book and makes it disappear and reappear with a magic trick. Donald, who is not amused, tries to impress Rooney by doing a similar trick with an egg. The egg is however obviously hidden under Donald's hat and Rooney who is aware of this, crushes it, laughing loudly. Donald gets extremely angry and starts waving his fists, while Rooney manages to put a violin in Donald's hands. When Donald discovers he has been tricked for the third time he throws the violin at Rooney. Rooney ducks and the instrument lands in the face of the police officer.

Alarmed, Donald runs away and hides under a bell-jar carried by actor Henry Armetta. When the police officer discovers Donald's hiding place the duck runs to another film set full with ice. There he meets Sonja Henie and asks her for an autograph. Henie signs her name by skating it in the ice, so that Donald has to carry it with him. While walking in a desert setting Donald discovers the ice has melted. He notices a tent with the silhouettes of three belly dancing Arabic women, who turn out to be the Ritz Brothers. Excited, he asks them for their autographs, but behaving like screwballs they jump on Donald and sign their group name on his buttocks. An enraged Donald throws a paint can at their heads, but it hits the police officer in the face instead.

Once again, Donald has to flee and he runs to a castle with the sign "The Road to Mandalay", which turns out to be just a model. After bumping his head into it and realizing his mistake he runs into another direction. On a pair of stairs, he bumps into Shirley Temple. She, too, recognizes him and asks for an autograph. They both sit down to sign each other their autographs and Donald, excited he has his first real autograph, jumps in the air with joy. Then suddenly the police officer grabs him! Shirley then protests by saying: "You leave him alone. He's Donald Duck!". The police officer is surprised and drops Donald on the floor: ""Donald Duck?" Did you say "Donald Duck"?" Other Hollywood actors hear his comment and enthusiastically rush to Donald to ask him to sign his autograph for them. (In chronological order: Greta Garbo, Clark Gable, The Andrews Sisters, Charlie McCarthy, Stepin Fetchit, Roland Young, The Lone Ranger riding Silver, Joe E. Brown, Martha Raye, Hugh Herbert, Irvin S. Cobb, Edward Arnold, Katharine Hepburn, Eddie Cantor, Slim Summerville, Lionel Barrymore, Bette Davis, Groucho Marx, Harpo Marx, Mischa Auer, Joan Crawford, and Charles Boyer). When the police officer asks Donald to sign his autograph book and offers him his pen, Donald squirts ink in the policeman's face. While the ink drips from his face and writes Donald's name on his chest, Donald laughs hysterically.

Sonja's name skated on ice by herself

The Andrews Sisters with Charlie 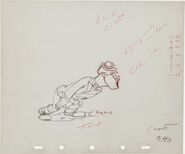 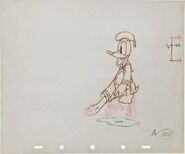 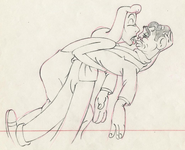 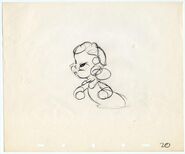 Retrieved from "https://disney.fandom.com/wiki/The_Autograph_Hound?oldid=4228260"
Community content is available under CC-BY-SA unless otherwise noted.