"Fight As One"
by Bad City

The series initially features a team based on the roster for the original Avengers, composed of Iron Man, the Hulk, Thor, Ant-Man, and the Wasp. The team is later joined by Captain America, Hawkeye, Black Panther, Ms. Marvel, and Vision, while Spider-Man is named to reserve status. In terms of tone and style, the series is based principally on the original stories by the likes of Stan Lee and Jack Kirby. However, it also tends to utilize material from all eras of the comic's run and other sources such as the Marvel Cinematic Universe.

According to statements made by Loeb, Head of Marvel TV at 2012 SDCC, this series will transition/reboot into a "continuation" entitled Avengers Assemble in 2013. Details of such in-story transition have not been specified at the panel.

As the world's most dangerous super-villains break out of the Vault, the Cube, the Big House, and the Raft, five of Earth's mightiest heroes assemble a crime fighting alliance called the Avengers. The Avengers' team includes Iron Man as team leader, Ant-Man, Thor, The Hulk, and The Wasp. Captain America, Black Panther, and Hawkeye later join the roster. In the Season Finale, it is revealed that Thor's brother Loki was responsible for the breakouts and had Enchantress form the Masters of Evil.

Season Two depicts the Avengers as they track down the remaining members of the Masters of Evil and end up facing the invasions of the Skrulls in the first half of season and the Kree in the second half of the season. The Avengers are unaware that Captain America has been replaced by a Skrull as part of the infiltration of Earth. Season 2 also suggests a developing storyline that Surtur is gathering strength to oppose the Avengers. Ms. Marvel and The Vision join the Avengers. Many other characters from the Marvel Universe such as Spider-Man, Wolverine, Scott Lang, Heroes for Hire, Doctor Doom, Surtur, Crossfire, Thunderbolt Ross, his Red Hulk form, Guardians of the Galaxy, Falcon, and Beta Ray Bill appear. Series producers Joshua Fine and Christopher Yost have revealed that certain returning characters will adapt their Ultimate Universe counterpart costumes, such as Nick Fury who returns in Season 2 appearing more like the Ultimate Universe Fury with a shaved head and goatee, and the Skrull who replaced Captain America wears the costume directly adapted from Ultimate Captain America and uses an energy shield. The second season premiere, entitled the "The Private War of Dr. Doom" (featuring Dr. Doom and The Fantastic Four) was shown to audiences at both the 2011 San Diego and New York Comic Cons; as well as the 2012 WonderCon in Anaheim, California. It premiered on April 1, 2012.

Marvel announced in October 2008 that its Marvel Animation division and the outside studio Film Roman would produce an Avengers animated TV series, The Avengers: Earth's Mightiest Heroes, for planned broadcast in 2010. 52 episodes have been confirmed as being in production. The show's executive producers include Simon Philips and Eric S. Rollman. Joshua Fine serves as supervising producer and Christopher Yost serves as story editor on the show. A 20 part micro-series debuted on September 22, 2010 on Disney XD, focusing on each hero's backstory and the events that lead to the main series. The series started airing on Marvel's sister network, Disney XD in the United States on October 20, 2010 and on Teletoon in Canada on October 22, 2010 in English-language and March 2011 in French-language. According to Jeph Loeb, Season 2 will presumably begin around October 2011, same as season 1 and Producer Josh Fine tweeted in April 2011 that 13 episodes have been completed. At the 2011 New York Comic-Con, Marvel TV director, Jeph Loeb contradicted his earlier statement of Season 2 launch in late 2011. Loeb announced at the panel at New York Comic-con that "Avengers Season 2 will be coming in early 2012 (to coincide with Ultimate Spider-Man)." This date would later get clarified to April 1, 2012.

A new Avengers show will premiere in 2013 called Avengers Assemble. On Saturday, July 14, 2012, Loeb, Head of Marvel Television, stated at the 2012 Marvel Television Presents panel at San Diego Comic-Con that The Avengers: Earth's Mightiest Heroes hasn't been canceled as Avengers Assemble is being viewed as "a continuation of that series." Specifics of the transition/continuation between the two series haven't been revealed at this time so the only actor from the show is Fred Tatasciore, the voice of the The Hulk on Earth's Mightiest Heroes, will continue in the role for Avengers Assemble while Adrian Pasdar will voice Tony Stark/Iron Man and also voices Stark in the separate Ultimate Spider-Man animated series.

The series's premiere earned mostly positive reviews from critics and fans alike. It also currently holds a 8.5 making "Great" rating (based on 206 votes) on TV.com, The Avengers: Earth's Mightiest Heroes on IMDb.com Review aggregation website Metacritic reports that 9.2 of users have given the series a "Universal acclaim" review based on 5 reviews.

The Avengers: Earth's Mightiest Heroes comic book series, written by Christopher Yost, and artwork by Scott Wegener, and Patrick Scherberger was published to accompany the series. It was a four-issue limited series. An ongoing comic book series titled The Avengers: Earth's Mightiest Heroes Adventures will debut in April 2012, alongside the Ultimate Spider-Man Adventures series. Christopher Yost will return as the main writer, with Adam Dekraker to serve as the comic's creative team, while Nuno Plati will provide artwork.

The original release date was November 8, 2011. This is the first home media release in Canada to be released by eOne Entertainment. The other Canadian home releases of The Avengers: Earth's Mightiest Heroes were released by Vivendi Entertainment. 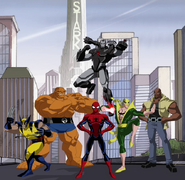