Monster from "My Pet Monster"

Pooh and his pals' target

To cause complete chaos (according to Owl), to return the items left out for him (real)

Gets trapped in an enormous pit

"Wow! It's amazing what you can find in the woods. A marble. And a boot."
The Backson is a new imaginary creature created by A.A. Milne as a part of the Winnie the Pooh stories, and the false antagonist in Disney's 2011 animated feature Winnie the Pooh. He is voiced by the late Huell Howser.

The Backson was first introduced in the A.A. Milne book The House at Pooh Corner. In the original story, "In Which Rabbit has a Busy Day and We Find Out What Christopher Robin Does in the Mornings", Rabbit finds a note from Christopher Robin similar to what Pooh finds in the film and asks the other animals if they've spotted a Herbaceous or Spotted Backson, until another note from Christopher Robin is found with better spelling. In the film, it is turned into a hunt for the Backson and setting a hole trap for it inspired by "In Which Piglet Meets a Heffalump". The Backson was animated by Eric Goldberg for the film, with the song going for a simplistic chalk drawing form.

One day when Pooh found a note he couldn't tell what it was. He goes to Owl to figure it out and Owl claims Christopher Robin has been kidnapped by a creature called The Backson. Pooh and friends have no clue what it is so Owl informs them of their new enemy.

He is a ferocious creature that enjoys torturing others and creating misfortune. He is responsible for holes in socks, broken teeth, aging, theft, catching colds etc. Pooh and his friends set off on a mission to rescue their friend before it's too late.

The plan is to gather material that The Backson enjoys destroying, dig an enormous pit and make the items lead to it. The Backson will follow the item and eventually fall into the pit himself thus saving Christopher and defeating the beast. While Pooh, Piglet, Rabbit, Owl, Kanga and Roo gather the material and set the trap, Tigger and Eeyore train to battle the beast if necessary.

Soon enough Pooh and friends get trapped in the pit but escape using the text. After they get out they reunite with Christopher Robin and everything is straightened out.

After the credits role the Backson comes out of the scary woods and proves to be real but instead of being a monstrous beast, he is actually very kind and the bait Pooh and the other left for him he decided to pick them up to return to them but falls into the pit as planned. He decides to wait for someone to help him out and hopes he'll be back soon. 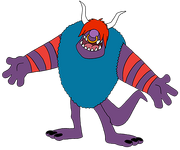 Owl & The Backson.jpg
Owl sings about the Backson and what he looks like
Backson.jpg
Add a photo to this gallery

Retrieved from "https://disney.fandom.com/wiki/The_Backson?oldid=1369308"
Community content is available under CC-BY-SA unless otherwise noted.