The Ballad of Davy Crockett

The Ballad of Davy Crockett

Fess Parker
Louis Armstrong
They Might Be Giants
"The Ballad of Davy Crockett" is a song with music by George Bruns and lyrics by Thomas W. Blackburn.

The song was introduced on the TV miniseries Davy Crockett, first telecast on December 15, 1954, on ABC's Disneyland. Fess Parker played the role of Davy Crockett and continued in four other episodes made by Walt Disney Studios. It was sung by The Wellingtons. Buddy Ebsen co-starred as George "Georgie" Russel, and Jeff York played legendary boatman Mike Fink. It is included in Disney's Sing-Along Songs: Zip-A-Dee-Doo-Dah.

The first album version was recorded by Bill Hayes, quickly followed by versions by Fess Parker and Tennessee Ernie Ford (recorded February 7, 1955). All three versions made the Billboard magazine charts in 1955: Hayes' version made #1 on the weekly chart (from March 26 through April 23) and #7 for the year, Parker's reached #6 on the weekly charts and #31 for the year, while Ford's peaked at #4 on the weekly country chart and #5 on the weekly pop chart and charted at #37 for the year. A fourth version, by bluegrass singer Mac Wiseman, reached #10 on the radio charts in May 1955. The song also reached #1 on the Cash Box charts, from March 26 through May 14, 1955. A contemporary version also exists of the Western singing group the Sons of the Pioneers. Over ten million copies of the song were sold.

In the 1980s, the song was featured on The Disney Channel as a music video on DTV, set to footage of Pioneer Days, No Hunting and Californy 'er Bust. Interestingly, the DTV version is sung almost entirely in Japanese by Kazuya Kosaka for Crown Records.

Born on a mountaintop in Tennessee,
Greenest state in the land of the free
Raised in the woods so's he knew ev'ry tree,
killed him a b'ar when he was only three
Davy, Davy Crockett, king of the wild frontier!

In 1813, the Creeks uprose,
addin' redskin arrows to the country's woes
Now, Injun fightin' is somethin' he knows,
so he shoulders his rifle an' off he goes
Davy, Davy Crockett, the man who don't know fear!

Off through the woods he's a marchin' along,
makin' up yarns an' a singin' a song
Itchin' fer fightin' an' rightin' a wrong,
he's ringy as a b'ar an' twic't as strong
Davy, Davy Crockett, the buckskin buccaneer!

Andy Jackson is our gen'ral's name,
his reg'lar soldiers we'll put to shame
Them redskin varmints us Volunteers'll tame,
'cause we got the guns with the sure-fire aim
Davy, Davy Crockett, the champion of us all!

Headed back to war from the ol' home place,
but Red Stick was leadin' a merry chase
Fightin' an' burnin' at a devil's pace,
south to the swamps on the Florida Trace
Davy, Davy Crockett, trackin' the redskins down!

Fought single-handed through the Injun War,
till the Creeks was whipped an' peace was in store,
An' while he was handlin' this risky chore,
made hisself a legend for evermore
Davy, Davy Crockett, king of the wild frontier!

He give his word an' he give his hand,
that his Injun friends could keep their land
An' the rest of his life he took the stand,
that justice was due every redskin band
Davy, Davy Crockett, holdin' his promise dear!

Home fer the winter with his family,
happy as squirrels in the ol' gum tree
Bein' the father he wanted to be,
Close to his boys as the pod an' the pea
Davy, Davy Crockett, holdin' his young'uns dear!

But the ice went out an' the warm winds came,
an' the meltin' snow showed tracks of game
An' the flowers of Spring filled the woods with flame,
an' all of a sudden life got too tame
Davy, Davy Crockett, headin' on West again!

Off through the woods we're ridin' along,
makin' up yarns an' singin' a song
He's ringy as a b'ar an' twict as strong,
an' knows he's right 'cause he ain' often wrong
Davy, Davy Crockett, the man who don't know fear!

Lookin' fer a place where the air smells clean,
where the trees is tall an' the grass is green
Where the fish is fat in an untouched stream,
an' the teemin' woods is a hunter's dream
Davy, Davy Crockett, lookin' fer Paradise!

Now he's lost his love an' his grief was gall,
in his heart he wanted to leave it all
An' lose himself in the forests tall,
but he answered instead his country's call
Davy, Davy Crockett, beginnin' his campaign!

Needin' his help they didn't vote blind,
They put in Davy 'cause he was their kind
Sent up to Nashville the best they could find,
a fightin' spirit an' a thinkin' mind
Davy, Davy Crockett, choice of the whole frontier!

The votes were counted an' he won hands down,
so they sent him off to Washin'ton town
With his best dress suit still his buckskins brown,
a livin' legend of growin' renown
Davy, Davy Crockett, the Canebrake Congressman!

He went off to Congress an' served a spell,
fixin' up the Govern'ments an' laws as well
Took over Washin'ton so we heered tell,
an' patched up the crack in the Liberty Bell
Davy, Davy Crockett, seein' his duty clear!

Him an' his jokes travelled all through the land
an' his speeches made him friends to beat the band
His politickin' was their favorite brand,
an' everyone wanted to shake his hand
Davy, Davy Crockett, helpin' his legend grow!

He knew when he spoke he sounded the knell
of his hopes for White House an' fame as well
But he spoke out strong so hist'ry books tell
an' patched up the crack in the Liberty Bell
Davy, Davy Crockett, seein' his duty clear!

When he come home his politickin' done
The western march had just begun
So he packed his gear an' his trusty gun,
an' lit out grinnin' to follow the sun
Davy, Davy Crockett, leadin' the pioneer!

He heard of Houston an' Austin so,
to the Texas plains he jest had to go
Where freedom was fightin' another foe,
an' they needed him at the Alamo
Davy, Davy Crockett, the man who don't know fear!

His land is biggest an' his land is best,
from grassy plains to the mountain crest
He's ahead of us all meetin' the test,
followin' his legend into the West
Davy, Davy Crockett, king of the wild frontier!


This version of the song was performed by They Might Be Giants, though combined with futuristic elements. It was included in the 2008 album Disney Music Block Party and later in the 2009 album, Here Comes Science.

Reborn in the stratosphere and Saturn-bound,
Flyin' fast and miles off the ground
Jumped from the spaceship just to look around,
and shot off his gun without makin' a sound
Davy, Davy Crockett, king of his brand new place!
Davy, Davy Crockett, travelin' through outer space!

Hidin' in the cargo was a robot drone,
Programmed to destroy Davy's spaceship home,
Davy switched out his brains, now the drone's a dog clone,
Named him "Copernicus" and threw him a bone
Davy, Davy Crockett, king of his brand new place!
Davy, Davy Crockett, travelin' through outer space!

Walt Disney Productions launched a massive marketing campaign in the UK in 1955 to publicize the film Davy Crockett, King of the Wild Frontier (released in Britain in 1956) and to make the country's youth "Crockett conscious." There was already a "Crockett craze" in the U.S., where the episodes had become wildly popular. Crockett merchandise was produced en masse, the most iconic item being the imitation coonskin cap. The craze became immensely popular amongst schoolchildren, and the ballad made its way across the Atlantic Ocean. A French version by Annie Cordy was number 1 for 5 weeks in France in August 1956.

The United States Senator Estes Kefauver of Tennessee, a Democratic presidential hopeful, wore a Davy Crockett cap during the 1956 campaign, as the Democratic vice-presidential nominee. Stevenson-Kefauver lost in the general election to Eisenhower-Nixon.

The Crockett phenomenon is referenced in books of the time such as Back in the Jug Agane, one of the Molesworth series by Geoffrey Willans and Ronald Searle.

The craze was referenced in the film Back to the Future, which is set predominantly in 1955. In the film, the Fess Parker version of the song is heard on a jukebox and, in a later scene, one of Lorraine Baines' brothers appears wearing a coonskin cap. The song is sung by Henry and Sammy in Country Bear Jamboree. Although in this version, since bears are the star of the show, the lyric is changed to "tamed him a b'ar when he was only three". The 2009 film Fantastic Mr. Fox opens with the eponymous fox playing the song on his belt radio. 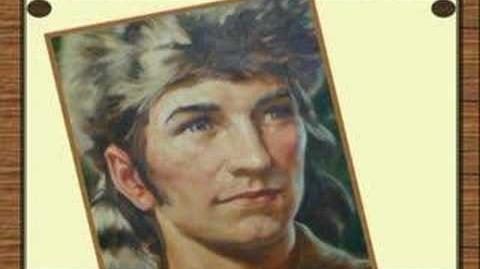 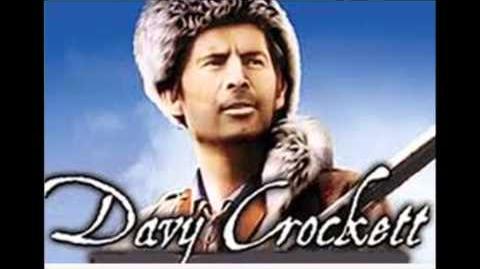 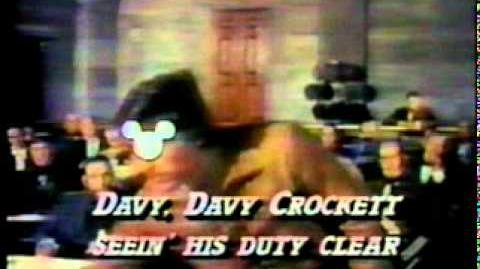 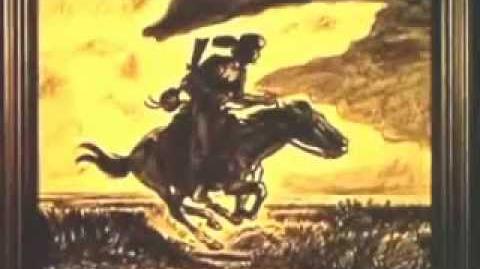 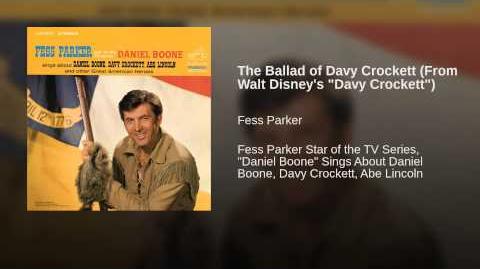 The Ballad of Davy Crockett (in Outer Space)-2

The Ballad of Davy Crockett-2

The Ballad of Davy Crockett-3

The Ballad of Davy Crocket-2