The Beaver Hunters is an unproduced animated short that was to have been released in 1939.

Donald and Pluto go hunting for beavers, but the wily rodents foil them, even though Donald disguises himself as a tree and uses ingenious weapons, such as a rifle that fires a plumber's helper. 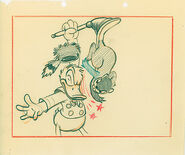 Add a photo to this gallery
Retrieved from "https://disney.fandom.com/wiki/The_Beaver_Hunters?oldid=3815584"
Community content is available under CC-BY-SA unless otherwise noted.