The Beginning of the End

Amphibia
"The Beginning of the End"

April 30, 2022
"The Beginning of the End" is the second segment of the fifty-sixth episode of the Disney Channel animated series, Amphibia.

The final battle for Amphibia begins as the Wartwood resistance begin their battle against Andrias while Anne and her team work to rescue Marcy and retrieve the Calamity Box. Unfortunately, someone has even more sinister plans ahead of them.

In flashback, Anne, Sasha and Marcy are having a sleepover while watching War of the Warlocks. While Marcy is invested, Anne and Sasha are only mildly paying attention until they both fall asleep; leaving Marcy to quietly enjoy the finale of the movie by herself. In the present, the rebellion has gathered and are preparing to go to war. However, Sasha decides to speak to Anne privately about their relationship with Marcy. While Sasha is still upset with her over how she tricked them and nearly ruined their lives, Anne is still forgiving of her and even comes to believe that neither of them have treated her well in the past, nor showed any real interest in her hobbies.

King Andrias is surprised by the arrival of the rebellion and sends his robots to go and fight them. True to the plan, the frogs, toads and newts all take out the robot army. During which, Apothecary Gary, the olms and the Moss Man, whose mere existence causes everyone to believe One-Eyed Wally finally, allows them to take advantage of the fight. Andrias hops down to fight the rebellion himself. Anne, Sasha, the Plantars and Grime enter the castle where Anne finally tells Sasha that while she is upset with Marcy, she has learned to forgive her, much like how she forgave her and Hop Pop. They come across a mind controlled Yunan and Olivia, but they manage to destroy their collars thanks to a synchronized dance performed by Sasha and Anne.

Before Olivia and Yunan can fully warn them about what happened to Marcy, the group fall into Darcy's trap as they use tentacles to capture the group. They announces their victory causing the rebellion to retreat. However, Anne realizes that Darcy and Andrias are just as clueless about the music box as they are and just as they are about to kill her, Anne suggests that doing so might destroy what is left of the box's power. Darcy realizes that this might be true and decides to keep her alive for now. With the box fully powered up, they open a portal back to Los Angeles. Everyone in the city looks up in horror as Andrias' castle and his robot army darken the skies as they begin the invasion.

“What have you done with Marcy?!”

“Give us our friend…”

"Doubtful you ever were."

The Invasion of Earth begins! 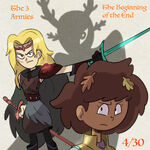