The Big Blue House is where most of the main action of the series Bear in the Big Blue House takes place. Located in Woodland Valley, it looks somewhat small from the outside as it is shot with a miniature, but large and roomy on the inside.

Bear lives here and runs a sort of daycare/group-home. Tutter has his mousehole in the house, while most of the other young characters only spend the day here. The Big Blue House is often described as warm and cozy.

The Big Blue House has five rooms. The kitchen and the living room are downstairs. Bear has his very own swing where he sometimes sits and reads in the living room. Tutter's mousehole is in the kitchen The front door, where Bear greets the viewers at the beginning of each episode, is also downstairs. Upstairs is the bathroom and Bear's bedroom. Ojo has her own room, but it isn't stated where it is. Finally, Bear stores various items in the attic. There's also a landing there where Bear visits each night to talk with his friend Luna, the moon.

Bear gave the following directions on how to reach the Big Blue House in the episode "Woodland House Wonderful." --- "Just take the path that leads into the woods, make the right past the big oak, go right, past the pond and then you're there." 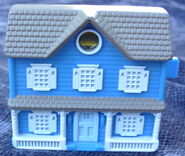 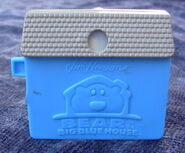 Retrieved from "https://disney.fandom.com/wiki/The_Big_Blue_House?oldid=4046892"
Community content is available under CC-BY-SA unless otherwise noted.