B.B. the Clown
The Valentine Bandit

Always gets sent back to jail

The Birthday Bandit, formerly known as B.B. the Clown, is one of the recurring villains from Teamo Supremo.

He is a birthday party entertainer who has turned to a life of crime due to having never received any presents for his birthday, so he now goes about stealing presents from birthday parties and ruining the occasion for the guests.

He employs a trio of jester themed henchmen, which he calls his Party Favors, consisting of a fat man wearing an orange jester's hood, a comparatively thin man wearing a green one, and a woman with a yellow hood. The two male Party Favors have never been referred to by name, but the female one is named Evelyn, and has been known to work alongside her boss without the other two Party Favors.

The Bandit has also been harboring a crush on Dutch actress Viva Voom, even sending her cards every Valentine's Day. But since Viva is already in love with Governor Kevin, the feeling obviously isn't mutual. This rejection led to the Bandit changing his name to the Valentine Bandit, and his Party Favors being called his Lonely Hearts. As the Valentine Bandit, he attempted to ruin Valentine's Day for the state and kidnapped Viva, but he was still unsuccessful in escaping capture by Teamo. 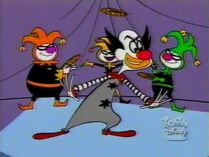 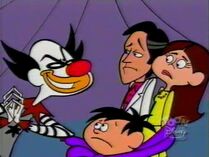 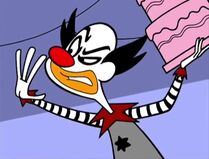 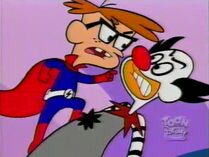 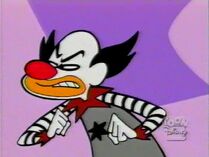 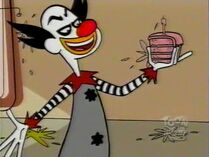 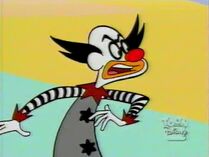 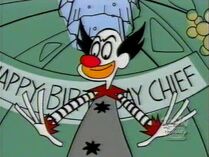 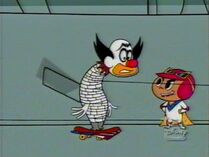 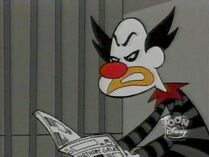 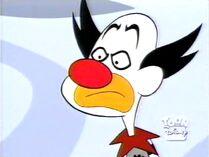 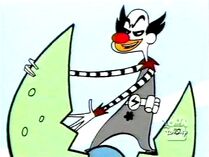 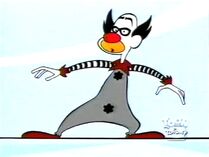 Add a photo to this gallery
Retrieved from "https://disney.fandom.com/wiki/The_Birthday_Bandit?oldid=3406617"
Community content is available under CC-BY-SA unless otherwise noted.