“Let's get this patty started.”
―Tagline

The Bob's Burgers Movie is an animated musical adventure comedy film based on the animated TV series of the same name. This is the second film based on a FOX animated series, the first being The Simpsons Movie in 2007. The events of the film take place between the 12th and 13th seasons of Bob's Burgers.

It was theatrically released by 20th Century Studios on May 27, 2022, and distributed by Walt Disney Studios Motion Pictures.

The Bob’s Burgers Movie is an animated, big-screen, musical comedy-mystery-adventure based on the long-running Emmy®-winning series. The story begins when a ruptured water main creates an enormous sinkhole right in front of Bob's Burgers, blocking the entrance indefinitely and ruining the Belchers’ plans for a successful summer. While Bob and Linda struggle to keep the business afloat, the kids try to solve a mystery that could save their family's restaurant. As the dangers mount, these underdogs help each other find hope and fight to get back behind the counter, where they belong."[1]

One week before summer vacation, the Belchers are all preparing for things to change. Bob and Linda try desperately to convince the bank to extend their loan by offering a burger, but the bank turns them down and gives them one week to drum up the money to keep their business afloat. Tina wants to ask Jimmy Jr. to be her boyfriend, but is afraid; not of getting rejected, but him saying yes as his real self might clash with her fantasy. Gene creates an instrument from an empty napkin holder, rubber bands and plastic spoons that he wants to use for his band, but is told that it sounds weird and Louise refuses to perform a stunt at school as she was afraid of losing her hat, which she believes makes her brave; resulting in a girl named Chloe Barbash calling her a baby.

One day, a sewage pipe explodes causing a giant hole to form in front of Bob's Burgers' entrance. Their landlord, Calvin Fischoeder, allows to withhold rent money from them so that they can pay the bank. Despite trying to keep the restaurant open, nobody comes, with the exception of Teddy, and Bob fears losing his restaurant with Linda trying to cheer him up. Louise explains to her toys that the reason why she is anxious about losing her hat is because Bob and Linda made it especially for her so that she would not be nervous on her first day at pre-school. After hearing Bob's worries, she decides to go down into the pit with Tina and Gene watching. However when she gets to the bottom, she discovers a skeleton whose teeth fall into her mouth.

The skeleton belongs to Cotton Candy Dan, a carny who was shot in the chest and somehow buried underneath the street. While the Belchers first believe that this will somehow resolve the issue with the pit, Mr. Fischoeder is indicted as the murderer and arrested. Louise believes that he is innocent and convinces Tina and Gene to skip school with her to find the real murderer starting by looking for their friend Mickey who has become a carny. They locate him to a trailer town of carny folk who refuse to tell the children anything. A large intimidating carny reveals that six years ago, Dan was with Mr. Fischoeder and his brother Felix the night he was murdered. Believing that Felix is the murderer and is trying to set up his brother, they meet with Sgt. Bosco who informs them that they found a cufflink that resembles a banana with a graduation cap on.

Meanwhile, Bob is struggling to keep the business afloat when Teddy arrives with a Bob's Burgers cart so that they can sell burgers on the street; an idea that excites Linda so much she takes Gene's burger suit, adds a bikini to it and starts wearing it. Due to the fact that they do not have a license to sell on the street, they hastily hide out in the wharf where they begin to get customers. The Belcher children break into Felix's lavish treehouse to find his missing cufflink, only to overhear that he has gotten back together with Tammy and plans to flee the country with her. The kids follow him to the wharf where Bob, Linda and Teddy accidentally anger the carnies when they knock over a shrine dedicated to Dan.

The kids discover a secret clubhouse underneath the Mole Hill ride and find Calvin and Felix, the former of whom was released on bail due to lack of evidence. They attempt to inform Calvin of Felix's treachery when their cousin and lawyer Oscar arrives to help settle their affairs. At this point, Louise realizes that Oscar was the murderer. Upon realizing that he has been found out, he holds everyone at gunpoint with a crossbow. Bob and Linda also arrive, having found the kids' bikes, and also get held up. Oscar reveals that he was tired of being looked down upon and hoped that Dan's death would force the wharf to shut down and he could build a mega park. However, no one found the body and he was stuck with his cousins until the Belchers inadvertently found it. He plans to continue framing Felix and Calvin and set the wharf on fire.

The Belchers manage to escape in a go kart with Oscar in pursuit and end up back at the restaurant, only for Oscar to shove them into the pit and bury them. Louise blames herself for the predicament when Bob and Linda reveal the true origin of her hat. It was based on Bob's mother's knit hat she used to wear and Linda fashioned it for her after her first day at school; telling her that she was always brave. Linda is about to give up, but Bob finally gets the gumption to escape the pit by having the kart break the pipe again and launching them out where Teddy is waiting for them. They call the police as they rush to stop the stop the wharf from getting set on fire and they succeed. Calvin and Felix are rescued from drowning and Sgt. Bosco arrives to arrest Oscar who was in the middle of solidifying his alibi.

One week later, Gene is performing with his band at the wharf. Bob and Linda are able to pay off the bank (a week later) thanks to Calvin, Tina manages to not only admit her feelings to Jimmy Jr., but also kiss him, which he reciprocates, and Louise performs the stunt at school and drops her hat, no longer afraid to do so, though her head is still not shown. After Gene's performance, it is revealed that the audience attendance was small.

In a post-credits scene, Tina has another fantasy about horseback riding with Jimmy Jr. and "sexy zombies".

Additionally, Paul F. Tompkins and Nick Kroll voice carnies living in a trailer town. The characters Jimmy Pesto Sr. and Trev appear but have no lines.

On October 4, 2017, 20th Century Fox announced that a movie based on the FOX animated series Bob's Burgers is in the works to be released on July 17, 2020.[2] Series creator Loren Bouchard had said the movie will "scratch every itch the fans of the show have ever had", while being appealing to new audiences.[3]

On July 18, 2018, Bouchard said that the script has been submitted and accepted by the studios. The movie will be a musical comedy and would involve Louise and her night light Kuchi Kopi inside her fantasy world as a minor subplot.[5]

On April 3, 2020, in announcing revised released dates due to the global health crisis of the COVID-19 outbreak, Disney announced that the film would be delayed until April 9, 2021.[10]

On September 24, 2020, star H. Jon Benjamin confirmed that work on the film was being done remotely due to the COVID-19 pandemic, while also revealing that recording for the film has already begun,[11] with the cast reprising their roles from the television series.

On January 22, 2021, Disney indefinitely delayed the release of the film, raising questions about the movie heading to Disney-owned streaming platforms.[12]

The review aggregator website Rotten Tomatoes reported an 86% approval rating with an average rating of 7.00/10, based on 111 reviews. The site's critical consensus reads, "The Bob's Burgers Movie offers all the heart, humor, and clever callbacks that fans of the show will be looking for while remaining an entertaining entry point for the unconverted." Metacritic assigned the film a weighted average score of 75 out of 100 based on 32 critics, indicating "generally favorable reviews". 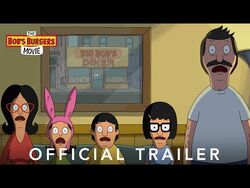 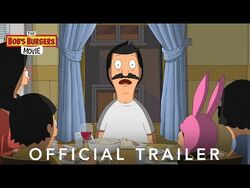