Being interferred by a cat

Gets shot by both Flattop and Itchy's tommy guns, along with Stooge, Shoulders, Little Face, and the Rodent

"Well, Little Face?"
The Brow is one of Lips Manlis' minions and one of the antagonists from Disney/Touchstone's 1990 film Dick Tracy. He was played by Chuck Hicks. Along with Shoulders, Little Face, Rhodent, and Stooge Viller, he was one of the 5 criminals in the employ of Lips Manlis that was shot and killed by Flattop at the Seventh Street Garage in the beginning of the film. He is shown holding 2 pair, aces and eights, which is commonly known as "the dead man's hand". 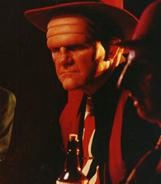 Retrieved from "https://disney.fandom.com/wiki/The_Brow?oldid=4049508"
Community content is available under CC-BY-SA unless otherwise noted.