Emmie and Alma's mother are having a yard sale today until Doc brings her toys to life, as well as a stuffed bunny named Pickles, Alma's favorite toy. Thinking she is being sold, Pickles tries to run away, until Doc explains to her that Alma would never do that, as Pickles also discovers that she has no nose. 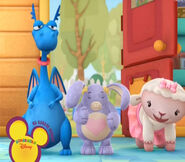