Howl's Moving Castle
The Cat Returns (Japanese: 猫の恩返し Hepburn: Neko no Ongaeshi, lit. The Cat's Repayment) is a 2002 Japanese animated drama film directed by Hiroyuki Morita of Studio Ghibli. A spin-off of Whisper of the Heart, it was theatrically released in Japan on July 19, 2002 through the Toho Company and in 2005 in the United States through Walt Disney Home Entertainment.[3]

It received an Excellence Prize at the 2002 Japan Media Arts Festival.

The story is of a girl named Haru, a quiet, shy, and ditsy high school student who has a suppressed ability to talk with cats. One day, she saves a darkly-colored, odd-eyed cat from being hit by a truck on a busy road. The cat is Lune, Prince of the Cat Kingdom. As thanks, the cats give Haru gifts of catnip and mice, and she is offered the Prince's hand in marriage. Her mixed reply is taken as a yes.

Wanting none of this, Haru hears a kind, female voice, which tells her to seek the Cat Bureau. Haru meets Muta, a large white cat the voice told her to seek for directions, who leads her there to meet the Baron (the same Baron from Whisper of the Heart), who is a cat figurine given life by the work of his artist, and Toto, a stone raven who comes to life much like the Baron. Soon after meeting them, Haru and Muta are forcefully taken to the Cat Kingdom, leaving Toto and the Baron in the human world to follow the group from the air. The Baron and his crow friend find the entrance to the Cat Kingdom on Earth: Five lakes forming a cat's paw.

Haru is treated to a feast at the castle of the Cat Kingdom, and she begins to slowly turn into a cat with tan paws, ears, and whiskers, though still mainly human so that she will make a suitable bride for the Prince. At the feast, the Baron (in disguise) dances with Haru as part of the entertainment and reveals to her that the more she loses herself in the kingdom, the more cat-like she will become and that she has to discover her true self. When the Baron is discovered and is forced to fight the guards, he and Haru are helped by Yuki, a white female cat who works as a servant in the palace and who had tried to warn Haru to leave the Cat Kingdom before she was taken to the castle. Yuki shows them an escape leading to a tunnel.

Haru, the Baron, and Muta's escape moves them through a maze to a tower, which contains a portal to Haru's world. The King goes through a series of efforts to keep them in the Cat Kingdom long enough for Haru to remain trapped in the form of a cat and have her as his daughter-in-law.

Lune and his guards return to the Cat Kingdom to reveal that the King was not acting on his behalf and has no desire to marry Haru; he has instead planned to propose to Yuki. Muta is revealed to be a notorious criminal in the Kingdom (having devoured a whole lake of fish in one session), and Yuki as being the strange voice who had advised Haru to go to the Cat Bureau. In her childhood, Haru had saved Yuki from starvation by giving her the fish crackers she was eating, and Yuki has now repaid her kindness. Muta, or as he is known as the infamous criminal Renaldo Moon, tells Haru, "Just for the record, I admire a young woman who speaks from the heart" after she rejects the King's marriage proposal outrightly and proceeds to help her escape from the King's soldiers.

Eventually, the Baron, Haru, and Muta escape the Cat Realm, with the aid of Prince Lune and Toto, and Haru discovers her true self and tells the Baron how she has come to like him. He tells her, "I admire your sincerity," and that when she needs them, the doors of the Cat Bureau will be open for her again. Haru returns to the human world with more confidence in herself; after learning that her former crush has broken up with his girlfriend, she simply replies, "it doesn't matter anymore."

In 1995, Studio Ghibli released a film entitled Whisper of the Heart, based on a manga by Aoi Hiiragi, of a girl writing a fantasy novel. Although the girl's life had no magical elements, the film featured short fantasy scenes depicting what the girl was writing of the Baron, a character of her novel, was so popular that an indirect sequel was made, featuring the Baron and another girl, a high school student, named Haru. Muta also returned.

The Cat Returns began as the "Cat Project" in 1999. Studio Ghibli received a request from a Japanese theme park to create a 20-minute short starring cats. Hayao Miyazaki wanted three key elements to feature in the short — these were the Baron, Muta (Moon) and a mysterious antique shop. Hiiragi was commissioned to create the manga equivalent of the short, which is called Baron: The Cat Returns (バロン 猫の男爵, Baron: Neko no Danshaku?, lit. Baron: The Cat Baron) and is published in English by Viz Media. The theme park later canceled the project.

Miyazaki then took the existing work done by the "Cat Project" and used it as testing for future Ghibli directors — the short was now to be 45 minutes long. Responsibility was given to Hiroyuki Morita, who had started as an animator in 1999 for the film My Neighbors the Yamadas. Over a nine-month period he translated Hiiragi's Baron story into 525 pages of storyboards for what was to be The Cat Returns. Miyazaki and Toshio Suzuki decided to produce a feature-length film based entirely on Morita's storyboard; this was partly because Haru, the main character, had a "believable feel to her".[4] It became the second theatrical (third overall) Studio Ghibli feature to be directed by someone other than Miyazaki or Takahata.

According to Rotten Tomatoes, the film holds an aggregate rating of 89% "fresh" among all critics, based on 19 reviews. Michael Booth of The Denver Post noted that "[Director] Morita has a slightly cruder, more realistic sense of the world and its looniness than does Miyazaki, and you can see where The Cat Returns moves on a different track even as it pays homage to Japan's current animation master.[7]" 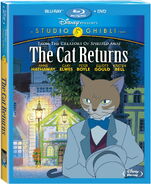 Japanese DVD title of the film The Cat Returns.