The Chief Elder, also known as the Elder-in-Chief, presides over the government of Pangaea in Dinosaurs.

The Council of Elders is often mentioned throughout the course of the series, but first appears in "The Golden Child". In this earliest appearance, the elders are a group of shrouded figures, who all speak with the same commanding voice and appear to have near mystical properties. In subsequent appearances, though the robes occasionally resurfaced, the council of elders had been modernized. The council now seemed to be a closer analogue to the United States Senate or Congress, with the Chief Elder in a role akin to that of president, an elected official rather than a member of an ancient order, allowing for greater satirical relevance. Pangaea appeared to have a very high turnover rate regarding the position of Chief Elder. Played in all but one incarnation by a hand-puppet Unisaur, the earliest individual holder of the title appeared in the two-part episode "Nuts to War". A frilled and bespectacled dinosaur, the Chief Elder plunges Pangaea into war with the dinosaurs across the swamp over nut supplies, recanting his position only after casualties affect his popularity. In "And the Winner is...", the Chief Elder (a full-bodied green dinosaur) has regained some mystique, clad again in robes and presiding over the traditional infant-naming ceremony. His sudden death by heart attack while naming Baby Sinclair leads to an emergency election. Earl Sinclair and B.P. Richfield are the chief candidates, but commentator Edward R. Hero is elected instead. Hero's puppet, a crinkly almost humanoid Unisaur, would be recycled for all subsequent chief elders, with different voices and slight alterations in hue and costume. In "Baby Talk", a council of multiple elders, functioning in a manner akin to the Supreme Court, is seen, with no clear designation as to the Chief Elder. A suited Chief Elder returns to the vitriolic politicking of his "Nuts to War" predecessor in "Green Card", blaming the slumping economy on the four-legged dinosaurs, and then on amphibians. This Chief Elder would return in "Working Girl". In "The Greatest Story Ever Sold", the Chief Elder is joined by two other elders, and debates the question of an established belief system for Pangaea, ultimately deciding in favor of the Great Potato as national deity. The Chief Elder's final "appearance" occurs off-screen, praising Earl's exposure of Georgie in "Georgie Must Die".

The Many Chief Elders 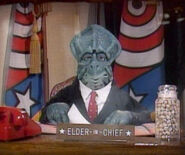 The Elder-in-Chief from "Nuts to War" 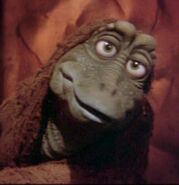 The dying elder in "And the Winner is..."

The Chief Elder from "Green Card" and "Working Girl"
Add a photo to this gallery
Retrieved from "https://disney.fandom.com/wiki/The_Chief_Elder?oldid=4237295"
Community content is available under CC-BY-SA unless otherwise noted.