The Skeksis from The Dark Crystal

Spending time with kids, being in command, ruling the playtime (both formerly)

Having his plans foiled, Reptillus betraying him, Battlesaurs figuring out the truth (all formerly)
The Cleric is the main antagonist of Toy Story That Time Forgot.

The Cleric is an anthropomorphic Ludodactylus and the spiritual leader of the Battlesaurs, and also the only one who knows about them being just toys. He has taken advantage of the fact Mason is distracted by his Optimum X console to keep the Battlesaurs in their ignorance and remain their leader and in complete control of their fate.

He is always accompanied by three similar-looking acolytes, which are apprentices in training.[1] The Cleric is headquartered in the tower of the "dream elders": the Triassic Tower, which is supposedly in communication with mysterious superior beings, but which is actually controlled by the Cleric to ensure that Mason (and Bonnie) are kept preoccupied with the Optimum X.

The Cleric is first seen when Woody, Buzz Lightyear, Rex, Trixie, and Angel Kitty arrive at the Battlesaur playset. At first, he orders Rex and Trixie to leave, but upon the insistence of Reptillus Maximus, he allows them to enter and has them endorse Battlesaur weaponry. At the same time, he has Woody, Buzz, and Angel Kitty being taken as prisoners.

However, the Cleric is upset that Trixie talks with Reptillus, as she may lead him to realize they are toys. As a distraction, he activates the dream elders' call for battle. He then takes place at the Arena of Woe as the arbiter of the combats, deciding of the life and "death" of the toys pitted against Reptillus Maximus, though they mostly fall towards the latter.

When Trixie tries to save Woody and Buzz, all the Battlesaurs realize she has the name of Bonnie on her paw, which the Cleric (who suspected this earlier) identifies as "the mark of obedience", a sign that she has surrendered to someone. As a result, the Cleric deems Trixie unworthy of being a Battlesaur and an enemy. He then sends Reptillus after her when she escapes the arena.

Once the combats are finished, Woody and Buzz discover the Cleric's true nature as he prepares to dispose of them in "the pit", an aeration vane leading to a shredding fan. His plans are eventually foiled as Trixie succeeds to get Mason and Bonnie interested in their new toys, thus revealing to all Battlesaurs their true nature.

As Mason and Bonnie play with the Cleric, they release a pair of wings. Following this, it appears the Cleric had a change of heart and enjoys their new situation. 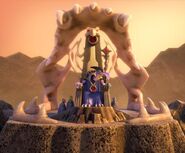 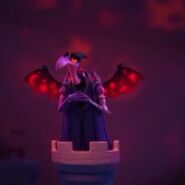