Steve
Dad (by Will)
Idiot (by Gwen Greyson/Royal Pain)

Heroics, his wife and son

Will Stronghold (son)
Josie Stronghold (wife)
The Commander (Steven "Steve" Stronghold) is one of the two tritagonists and a famed superhero who appears in the film Sky High. The Commander is a famous superhero who has powers of superhuman strength and invulnerability. He lives in a suburban lifestyle and work as real estate agent under the alter ego, Steve Stronghold along with his wife Josie also known as Jetstream. The Commander and Jetstream are considered to be the greatest superheroes in the world. They have a son, Will who is currently attending Sky High.

Steve Stronghold was born in 1957 to an unnamed father who also had powers and was a superhero. His childhood is a mystery.

Steve attended Sky High at the same time as Josie DeMarco (who he fell in love with) and Sue Tenny (who he viewed as strange). Using his super strength he was assigned to Hero Class.

After graduation, Steve chose his name The Commander and was paired with Jonathan who went by the alias All American Boy and became his sidekick.

In 1985, they were captured by a supervillain named Royal Pain and her sidekick Stitches, whom he intended to use his secret creation, the Pacifier until the unexpected arrival of Josie, now known as Jetstream came to the rescue them and together they destroyed Royal Pain's secret weapon, the Pacifier. Unbeknownst to the trio, Royal Pain survived the explosion then turned into a baby and she was actually Sue wearing armor. The Commander also believed, due to her electronic voice, that Royal Pain was male.

Steven hadn't seen Josie since Sky High and told him that she work as a real estate agent. He commented that he too wanted to do the secret identity gig while working a cub reporter but was considering switching to millionaire playboy. He had not considered to work as a real estate agent but to spend time with Josie, he decides to tag along wither her and take the job as his new cover. While flirting and chatting with Jetstream, with He quickly forgets his sidekick, All-American who was still bounded

The two were eventually married, and the Commander and Jetstream became a husband and wife team up against the forces of evil. They worked by day as real estate agents, something Jetstream was already into when they defeated Royal Pain. They settled into a house and secretly built the Secret Sanctum underground, where they stored the Pacifier.

They would continue to do battle with forces of darkness, such as a large creature with a tentacle as large as the Commander's body, or common criminals, whom he and Jetstream are known to fight five at a time. They also bested King Kamurah, whose wooden surf board (which presumably was by no means ordinary, considering Stitches recognized it at once) was stored in the Sanctum. Either before or after besting him, and around half a decade after defeating Royal Pain, they had an affair, resulting in the birth of their son, Will Stronghold. The Commander and Jetstream became renowned for their triumphs, even being widely considered the world's greatest superheroes.

The Commander is heroic and kind, as per expected of one of the world's greatest Supers. He is also caring and loving, especially when it comes down to family members.

The Commander is first seen taking down a monstrous robot with Jetstream. After Will's first day of school at Sky High, The Commander entrusts Will with the key to the family's Secret Sanctum (after Will promises that he will never bring anyone else there); the place where all the family's trophies of past victories are kept, including the Pacifier, of whose origins the Commander explained to his son.

Later on, Gwen Grayson meets the Strongholds and invites them to be the recipients of the very first Hero of the Year Award, which will be presented at the Sky High Homecoming Dance. The Commander and Jetstream accept and go to Sky High when the event happens. During Gwen's presentation of the award, it is revealed that she is Royal Pain and she unveils the Pacifier, now with Stitches by her side. The Commander, Jetstream and many others attempt to stop her, but she turns them back into infants. After Royal Pain is defeated, the Commander is depacified along with everyone else. 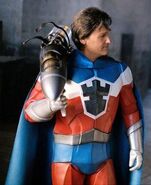 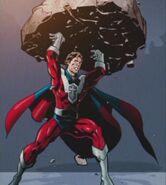