The Core & The King

Amphibia
"The Core & The King"

April 16, 2022
"The Core & The King" is the second segment of the fifty-fourth episode of the Disney Channel animated series, Amphibia.

King Andrias confronts the demons of his past.

The Core continues to upgrade itself while absorbing much of Marcy's personality. It chooses to call itself Darcy, short for "Dark Marcy", much to Andrias' confusion. As they prepare for the invasion, Andrias looks over an old portrait of himself and his friends. In flashback, a young and eagerly happy Andrias plays with his childhood friends Barrel, a toad, and Leif, a frog. While they live a care free life, Andrias is constantly watched over by his father, King Aldrich, who has plans for him. He tells him that should not rely on his friends as they will ask for "favors" and shows him the Core, which houses the memories of their ancestors, and explains the importance of the music box.

Andrias shows Barrel and Leif the music box, but after touching it, Leif suddenly has a horrible vision of the future. Leif sees Amphibia in ruins, the Olm's prophecy, and a giant flaming planet heading straight to Amphibia. Scared about her vision and coming to the conclusion that this is what will become of Amphibia should they invade Earth, she explains her findings to Aldrich. He thanks her, but ignores the warning. He then tells Andrias that she is a traitor that that they will do something about her. Leif tries to talk to Andrias, but marred by his father, he snaps at her. They make up, but she steals the key to the music box from Andrias pocket. He discovers this too late and chases after her, with Barrel also being ordered to capture her. Barrel lets her go after a lapse in judgment and Leif escapes Newtopia using one of the moss men, much to Andrias' anger. After her escape, Leif decides to visit the Olms and tell them of her vision.

Days later, Aldrich states that the music box is no longer in Amphibia, but is told by the Core that it will come back, though they do not know when or how, but when that day comes will be the day Andrias makes up his mistake. Hardened from the experience, Andrias is put in charge and orders Barrel to watch the outskirts of Amphibia and keep an eye out for the frogs. He slashes his portrait. In the present, Andrias has his childhood portrait burning in the fireplace, yet can't help but remember Leif's words of having his back and using his powers for good. After he awakens Darcy after it has rebooted and upgraded itself, it tells him that they are now close to starting their invasion of earth so that they can claim its resources. As Andrias agrees with it, it is revealed that the dominant personality in Darcy is that of King Aldrich. 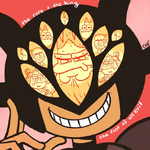 Andrias meets the Core for the first time