The Crew of the Flying Dutchman

This article is about the pirates from Pirates of the Caribbean. For other pirates, see Pirate Crew (disambiguation).

The Crew of the Flying Dutchman

The Crew of the Flying Dutchman are men who have given their souls to Davy Jones, in exchange for avoiding the shadowy unknown that is death. As the crewmen serve their hundred-year sentence aboard the Flying Dutchman, they begin to alter and transform into more monstrous beings; fused with the various creatures of the sea. This is due to the fact that Jones no longer ferries the dead of the sea to their final resting place as his job first entailed, and as such, the reason they are cursed along with him. Because of this, they also could not die or be killed easily until released from their years of service. However, the longer the crew stayed aboard the Dutchman in this state, the more they lost who they were until they literally became part of the ship.

When Will Turner is made new captain of the Dutchman, the ones who survived the Battle of the Maelstrom are cured of the curse, and Will gives the order to ready the ship's guns and help the Black Pearl finish Lord Cutler Beckett once and for all. No longer bound to the Dutchman, most of the crew, save for Bootstrap Bill, depart the ship; free once more.

The crew of the Flying Dutchman, freed from their curse.

Jimmy Legs: The bosun for the Flying Dutchman.

Playing a game of Liar's Dice. 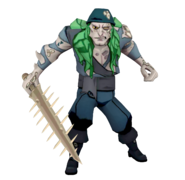