Disney Wiki
Register
Don't have an account?
Sign In
Advertisement
in: Character groups, Theme park characters, Pirates of the Caribbean characters,
and 19 more

Pirates of the Caribbean (attraction)
A Pirate's Adventure: Treasures of the Seven Seas

The wildest crew that ever sacked the Spanish Main

The Crew of the Wicked Wench make up the majority of the titular Pirates of the Caribbean in Disneyland's famous attraction of the same name.

These pirates were active during the 18th century (likely the 1710s to be specific) and operated out of a vessel known as The Wicked Wench. They were rivals with Captain Jack Sparrow and at one point competed with him in-search of the legendary treasure of the island Isla Tesoro.

The crew ransacked the city in search of the loot and while Jack got the gold first, it is inferred that in the end the crew of the Wench obtained it afterwards. They stashed the loot in the Grottos of the island where they created a makeshift lair only to suffer from the treasure's curse which caused them all to die and haunt the grotto in death.

The fates of specific members of the crew and the ship itself however do remain somewhat ambiguous within the attraction. Disneyland Paris' Pirates of the Caribbean shows that following the crew's death, Jack got his hands on their gold in the end.

Pirates of the Caribbean Films

This film features a flash-back with the pirates of the Wicked Wench being massacred by the pirate-hunter Captain Salazar and a young Jack Sparrow being a deckhand. However the continuity of this film is revisionist not only to the books but also the other films and features a large amount of plot-holes and contradicting information regarding its continuity with the other films.

The Wicked Wench was revealed to have been the canonical original name of the Black Pearl although it was a ship for the East India Trading Company and not a pirate ship and its crew would have been as much. This can be seen in the crew's raiding of Port Royal as their ship fires cannonballs at it and the crew sets it aflame mirroring the attack on Isla Tesoro. It can also be seen in their having stolen a cursed treasure of gold (based off that from the ride), stored it in a subterranean lair littered with skeletons, and been cursed to be skeletons themselves.

Blackbeard (or a character heavily based off of Blackbeard who was implied to be Blackbeard) was captain of the Wicked Wench when the attraction first opened up until 2006.

This Captain of the Wench was a feared and bloodthirsty man who lead the cannon-battle with Puerto Dorado's coastal fortress. He had a long black beard braided with ribbons and wore flintlocks strapped to his chest. In the current version of the ride it is unknown if he still holds a story/lore connection to the Wicked Wench.

Barbossa is a character who was created for the film Pirates of the Caribbean: The Curse of the Black Pearl and was inspired by the Blackbeard captain of the wench. He was integrated into the attraction in 2006.

Hector Barbossa is the nemesis of Captain Jack Sparrow, having once been his 1st mate before betraying him. Through unknown means and methods he became the captain of the Wicked Wench and lead the crew in their raid of Isla Tesoro and manhunt of Jack Sparrow. In Disneyland's version of the attraction he is shown in his classic piratical garb while in the Magic Kingdom he is dressed as a privateer for the British Royal Navy.

His corpse isn't explicitly shown in the lair of the Wench with a skeleton not necessarily his being seen as the captain, possibly implying that he lost his rank amongst the crew. In Disneyland Paris, he is shown to have been cursed by the treasure to be undead and roams the Hurricane Lagoon of the Ghostly Grottos, directly showing he had a different fate than the other members of the crew.

By the time that the crew of the Wench was killed by the treasure's curse, their captain was one apparently separate from Barbossa and not likely to have been Blackbeard. This captain was identified as, "The Cap'n" by ghosts and in a removed script was said to have been a man of wealth and taste. This leader had a pet parrot and enjoyed the harpsichord with them having had a well furnished cabin within the pirate's lair of Dead Man's Cove. They died in their bed while reading a map and were left as an undead skeleton just as the rest of their crew was.

The Auctioneer was a slimy, cunning and greedy pirate who held some authority and/or resources which allowed him to hold auctions where he sold of stolen loot from the pirates' raids to other pirates.

Redd is a woman of Irish descent who served aboard the Wench, notable as a sharp-witted gun for the Auctioneer. Following the raid of Isla Tesoro she appears to have flourished and at-some point she managed to become a notorious pirate in her own right; having some affiliation with the city of New Orleans.

The Hook Hand Pirate or, "Treasure-keeper" as some merchandise has referred to him as being is a violent and fearsome member of rank within the crew. As one might assume, he has only one hand with his left hand having been lost by unknown means and replaced with a gold-coloured hook. During the raid of Isla Tesoro, the hook-handed pirate took at-least six men to kidnap town officials such as the magistrate Carlos and use water-torture to try and extract information of the island's treasure from him.

The Pooped Pirate was a gluttonous, sick-minded and womanizing pirate who appeared to have particular note amongst the Wench's crew. This is inferred by his possession of the map of Isla Tesoro and in his holding the key to its treasury.

Pirates of the Caribbean: Dead Men Tell No Tale

The Wicked Wench and its crew appear in the story The Big Nap where they attack Port Royal (replacing Isla Tesoro), in-doing so freeing an imprisoned shepherd named Gus.

The crew appears as ghosts in the Captains of the Damned mission where they haunt Isla Tesoro. Players must traverse the haunted island to recover a treasure of Jack Sparrow's which was stolen by Barbossa.

The crew of the Wicked Wench serve as the main antagonists and anti-heroes in this attraction where they sack Isla Tesoro. In Disneyland and Disneyland Paris, they are also seen as skeletons in Dead Man's Cove.

A Pirate's Adventure: Treasures of the Seven Seas 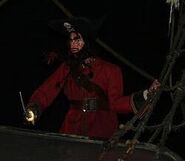 Blackbeard as he appeared as captain of the Wench

The quarters of the crew's skeletal captain

The Pooped Pirate, being spied on by Jack Sparrow

Poster identifying them as, "The Wildest Crew to Sack the Spanish Main" 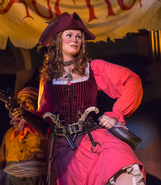 Redd alongside another of the Auctioneer's enforcers