The Dangerous Chemistry of Gandra Dee!

May 16, 2019
"The Dangerous Chemistry of Gandra Dee!" is the thirty-ninth episode of DuckTales. It premiered on May 16, 2019 and is the fifteenth episode in the second season.

With Huey and Webby's help, Fenton woos a punk rock scientist, only to uncover her dangerous plans for Gizmoduck.

During a severe thunderstorm on Duckburg's rooftops, Gizmoduck struggles with his speech against a weather-based supervillain named Dr. Atmoz Fear. He is distracted by a phone call from Huey, and Atmoz Fear tries to strike lightning on the armored hero. With careful precision, Gizmoduck punches the weather scientist off the roofs and a puddle shorts out Fear's climate control device returning the sky to normal. As Gizmoduck says he would "rain on [his] parade", Dr. Atmoz Fear is annoyed by what he has repeated before Gizmoduck carries him away, presumably to the authorities.

Outside the Ray's Electronics store, Webby and Huey are waiting patiently for Gizmoduck and the red-shirted duck tries to make an excuse when the armored duck hero arrives crashing into an alleyway. Fenton comes out with his bag and Webby realizes that Fenton is indeed Gizmoduck. Fenton tells the kids that his own subject is science for the time being. When he goes inside, the brown-feathered science duck is surprised to have gone viral over the news. Huey knows that Fenton is wearing himself down from saving the day constantly.

While looking for beam splitters, Fenton catches the eyes of a brown-haired female bird. Upon learning of dichroic splitters, the female bird says she too is a scientist. She also says high energy physics are a great challenge for newcomers. Fenton says he is a scientist and the girl thinks it is sell-out science; The girl scientist says she shatters expectations and works alone. Fenton also says he's working on a dangerous project but cannot figure the equation. The female wants to visit Fenton's lab and the latter says he would pick her up at a later time. Huey and Webby are filming this as a "meet cute". Fenton also wishes to know the girl's identity. The girl then introduces herself as Gandra Dee before departing.

At Fenton's home, he ponders over what to wear for his meeting with Gandra and Huey suggests formal dress clothes. Fenton wonders if his meeting will turn into a more romantic relationship. Huey believes it will be a date, then M'ma Cabrera barges in. M'ma advises her son to be his best version then shows a suit once worn by his father then warns if Gandra breaks his heart, she would hunt her down.

While riding in Launchpad's limo, Launchpad also believes Fenton's time spending with Gandra would be a date and tells of all the exes he has had himself. Gandra seeing Fenton wearing his father's suit calls him the "bad boy of science". Launchpad drives at top speed while Fenton insists on their meeting not being a date.

Later, Fenton and Gandra arrive at Gyro's lab which Huey has redesigned to like an Italian restaurant. At their table, Gandra complains the lab is uncouth with Italian decoration. With Gyro locked away, Webby insists that the pair order some spaghetti. Fenton panics but Huey gives advice from the Junior Woodchuck Guidebook that mood is essential to develop chemistry. Gandra receives a call from Mark Beaks who is expecting results. Gyro tries to get out but is shocked unconscious by the brown bird's nanotech hands.

Fenton tries to dismantle the Italian setting as Huey and Webby insist he and Gandra eat spaghetti then meet in the middle for a kiss. On another phone call, Gandra knows her nano serum is nonfunctional unless a "blathering blaherskite" recording is heard. Beaks already growing impatient begins to drink some nano serum from vials.

Back at the dinner table, Gandra tells of a nanobot infestation she accidentally released into her apartment building. She also thought a protonic reversal can negate a receptors. For that, people consider her a menace. Working in the lab, Fenton demonstrates Tasty Spray to make olives taste like glazed doughnuts. Gandra removes her glasses and flashes them; Those are called Eye Buds that make one's eyes be like wireless cameras. Fenton also presents Universal Solvent which can eat through anything like acid but ineffective against the strongest diamonds. Gandra complains that Scrooge could be gobbling the gems in the world, while Fenton stops a gold magnet from stealing his gold necklace. Gandra then removes her safety glove and shocks her date with her nanotech electricity.

With nanobots in her body, Gandra can channel electricity and Fenton wonders what the next word could be. Having only heard "blathering" and desperately, Beaks sets up his music and begins to storm the outer grounds of the lab defeating the laser turret defenses with dancing and using his phone to short them out. Beaks successfully breaks into the lab using the air ducts.

To show punk science, Fenton shows a bounce back ball racket called Fentonium. After an initial bounce, the crystal ball begins to build up speed and power. If unstable, the ball would wreck the lab. Gandra realizes her date is neat and they go back to the dining table to have their spaghetti dinner. As Huey sings for the pair, Webby senses something is amiss when she learns Gandra is working with Mark Beaks. Fenton admits that Gandra really seems to like him. As the brown science bird has an idea for a second date, Fenton gives away his cry to change into Gizmoduck. No sooner does he transform when Beaks arrives having recording the "blathering blatherskite" cry and synched the nanite serum with stolen gizmotech. Having drank an overdose of the nanite serum, Beaks' muscle mass begins to greatly enlarge and soon becomes a monster called Mega Beaks.

Gizmoduck realizes that Beaks has become an even dangerous monster than ever and engages him in a duel. Mega Beaks withstands Gizmoduck's mallet but gets pies splashed on him even winding up eating some pie tins. The fight rages with Mega Beaks striking Gizmoduck's armor until he uses the Tasty Spray, which the former happens to show distaste for. Mega Beaks also throws the Universal Solvent at the ceiling threatening to cave the lab in. Beaks manages to break part of the Gizmoduck helmet but gets flash photography from Webby in his eyes. Gizmoduck gets to a fair distance and readies a missile. It seems as though victory is at hand when Gandra shocks Fenton and sends the missile flying harmlessly.

Mega Beaks kidnaps Huey and Webby and the angry Gandra says she actually works alone as she wanted to fund Beaks' project. Gandra departs having been called a crook by Fenton. With the Gizmosuit useless, Fenton decides to try his Fentonium.

Mega Beaks takes the kids to his Waddle headquarters to garner attention. Just then, Fenton arrives using his Fentonium ball like tennis to hit Mega Beaks. The egotistical parrot catches the ball, but then Gandra shocks him with her nanobots. However, Mega Beaks repels Gandra as the nanobots will not work on his outer body, so Fenton suggests trying attacking Mega Beaks from within as his inner body is still frail. Fenton distracts Mega Beaks with news of his popularity spreading across Duckburg and the world and the parrot winds up wrecking the phone causing him to lose focus. At that distraction, Gandra charges the Fentonium ball and Fenton knocks into the insides of Beaks; The shock shorts out the nanotech and changes Beaks back to his weakened self.

Huey and Webby cheer for Fenton's victory even without the Gizmosuit, but then Huey cries for help. Fenton panics but sees that Gandra has left element notes on the racket. Back in the lab, Fenton uses his Fentonium to recharge Lil Bulb. Gyro is amused at his assistant's successful experiment but also dismayed at the lab's wreckage. 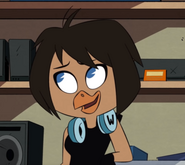