The Doctor Will See You Now

Doc McStuffins
"The Doctor Will See You Now"

Doc goes to the doctor for a wellness visit and reconnects with some old toy friends.

Dolly, Morton, Carl Chug a Chug, and Fabio, the toys in the waiting room at the doctor's office, receive a check up by Doc after wondering why the children in the clinic don't want to play them.

It's that time of the year as Dr. McStuffins takes her daughter Doc to the local clinic for her yearly check-up. She meets the head nurse Addie (sort of a human version of Hallie the Hippo) and while Doc is waiting in the playroom with Stuffy, Lambie, and Chilly, the toys meet 3 more toys, Carl a toy freight train, Dolly a plush princess and Morten the stuffed lion. Doc learns that the toys have blobby spots caused by a new toy named Fabio. A boy named Declan plays with the toys. 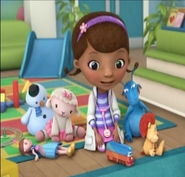