The Electric Mayhem Bus debuted in The Muppet Movie and has become one of the most iconic Muppet vehicles. This psychedelic-colored bus belongs to the Electric Mayhem, with the names of the individual band members adorning various sides of the bus, and is generally driven by Dr. Teeth. In The Muppet Movie, the bus allows for an intervention by the band, rescuing Kermit the Frog and friends from the desert, and carries the entire troupe to Hollywood. The bus resurfaced in the 1979 Macy's Thanksgiving Day Parade.

The bus was auctioned off after the completion of the first film, but re-acquired by the Jim Henson Company for use in Muppets From Space (one of only two Muppet films not owned by Disney). The bus is featured prominently in the film, refurbished but still boasting a 70s paint job and interior decoration. To match the new time period, the records hanging on the wall were replaced with CDs. The bus was also featured in Wendy's Kid's Meal promotions for the film.

The physical vehicle has since been sold and resold again, on eBay and off of it. Although visibly absent, it did merit a verbal tribute in The Muppets' Wizard of Oz, however. Commenting on the band's lateness, Floyd Pepper remarks, "We've been driving the same lousy bus since 1978." A reproduction of the bus was included among the relics on the Muppet Studios in The Muppets.

Dr. Teeth and the Electric Mayhem performing in their bus in The Muppet Movie.

The gang in front of the bus inside The Muppet Movie's ghost town.

The Electric Mayhem Bus on the set of The Muppets in 2010.

The bus appearing in the Disney Infinity video game. 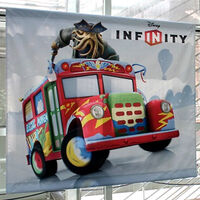 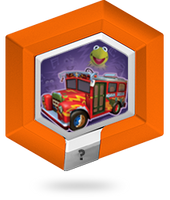 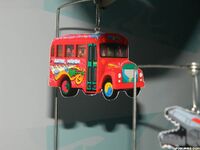